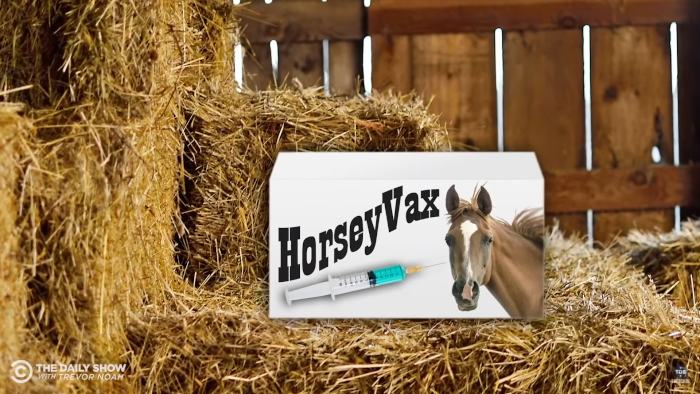 'The Daily Show' Has A Vaccine For Anti-Vaxxers

Do you know someone who still isn’t vaccinated? Have they taken a horse dewormer as an alternative? Are they making you question why you’re still trying to help them?! Well, The Daily Show has a solution for you!

Some Anti-Vaxxers have sunk to a new level of stupid. Instead of getting the free COVID vaccine, they’re choosing instead to take horse paste. It’s maddening and has only made things worse. What can we do to change the minds of people who already won’t listen? We trick them! Enter Daily Show correspondent, Michael Kosta.

In Kosta’s latest internet exclusive, he pitches a vaccine meant specifically for horses. Its name: Horsey Vax. Now, obviously, I’m not endorsing tricking people into taking medicine. Neither is Kosta. It’s a joke. However, I did feel it necessary to clarify that. We’re not dealing with animals here. Even though the drug they’ve chosen to take is meant for animals. This is basically the sketch equivalent of giving your dog heartworm medication wrapped in a piece of cheese.

Again, I’m not saying you should actually trick people. The lawyers at Pajiba (of which there are several) have made it clear that I need to say that. Don’t trick people into taking the vaccine. But if you did? Maybe use the Horsey Vax method! I’m not a doctor, but Anti-Vaxxers don’t listen to doctors anyway. At worst, I think we’re in a morally grey area.

Just to reiterate, Pajiba the website does not recommend you trick people into getting the vaccine.

That’s from me. I’m the one winking and nudging.