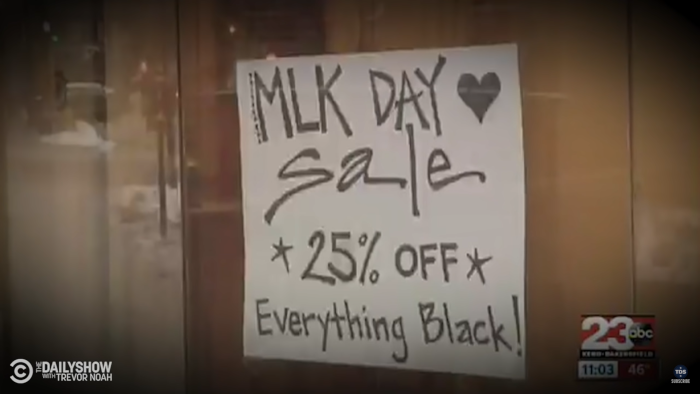 Yesterday was meant to be a celebration of a great man. Instead, if you looked on Twitter (which you should never do), you found scores of people misappropriating Dr. King’s message. People who actively undermine what King fought for used his name to score political points. It’s pretty sickening, but it is nothing new, as evidenced clearly by this Daily Show video.

The folks at The Daily Show compiled news clips of companies and individuals using King’s name for incredibly inappropriate reasons. Using King’s name to make a dollar is already pretty gross, and yet somehow, people find a way to make it even more abhorrent. Then, just when you think you’ve seen the worst of it, there’s MLK in Fortnite.

At this point, I’m surprised some people haven’t taken this further. We’re probably not far from a commercial that just features a CGI King. He stands proudly, looking out over a sea of dirty laundry, and says, “Now is the time for us to turn the Tide!” Then Gronk hands him a Tide Pod and a football and they tackle the dirty laundry together. You can see it, can’t you? It’s getting closer every day.

Maybe I’m wrong. Maybe this will be the year that people learn from their mistakes. Going forward, no one will use the name of Martin Luther King Jr. for profit or unrighteous political gain ever again! Or, the more likely scenario, he’ll be someone’s avatar in the next season of Alter Ego.