'The Boys' Season 2 Review: A Deeper Look at the Power of Corporate Control

This review is of the first three episodes of The Boys Season 2. Mild spoilers ahead.

When Homelander (Antony Starr) strolls into Stan Edgar’s (Giancarlo Esposito) office to confront him about Stormfront (Aya Cash) joining The Seven, the corporate-controlled “superheroes,” he’s livid. How dare Vought make such a decision without consulting him and getting his approval???

Stan, in a calm, deprecating way, tells Homelander how important he is to Vought. He doesn’t want to upset him because he knows the terrible acts Homelander has committed.

“I AM Vought,” screams Homelander.

He’s not, and Stan goes on to meticulously explain why Homelander (and The Seven) are simply nothing more than puppets. Vought is not a superhero company, they are a pharmaceutical corporation founded by a Nazi. And Homelander? He’s simply a cover-up for its illegal human experimentation and peddling of Compound V, a substance that gives people powers. You see, Homelander thought he had control. But now that Madelyn Stillwell is out of the picture (thanks to Homelander’s laser eyes and rage-fueled violence), Stan is no longer hiding what Vought is and, more importantly, who gets to call the shots.

This scene is The Boys Season 2 in a nutshell, throwing the first season’s rules out the window and leaning more heavily into the covert way that fascism sneaks into mainstream ideology and marketed as a need to protect and preserve a certain (and white) way of life. The series slows down to assess the events of Season 1, taking a step back to breathe and allow the characters some much-needed time to cope (sort of).

And it honestly works because it feels like there’s something more sinister brewing in the peripheral, with the country placing the blame on the men who are actually trying to take Vought and the supes down. Meanwhile, the Shining Light Liberation Army is painted as the quintessential terrorists, though their anger is due to the invading U.S. military, who slaughtered their people and eviscerated their villages. Vought shifts the blame and uses that newfound leverage to center The Seven as being even more heroic than ever, lying to the public to protect themselves and their interests and spinning their own tale to do it. It’s a masterclass in manipulation, which makes it all the more twisted and disturbing to watch. 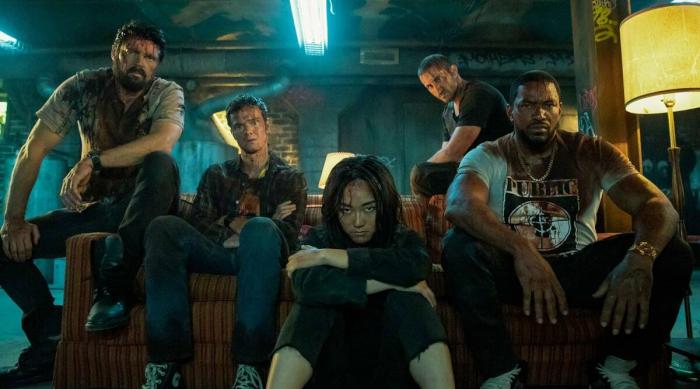 The Boys Season 2 feels particularly timely. The series banks on the idea that superheroes are actually the bad guys, but takes it a step further this season, exploring what that truly means. It’s not exactly nuanced, but that’s fine because it gets its point across. It’s the introduction of Stormfront that solidifies Season 2 for me. This attractive, seemingly charming woman is armed with the power of social media and access to millions, comes onto the scene with zero f*cks to give. She’s also unafraid of Homelander and angers him because she’s immune to his power and control. On the surface, she’s everything most people would typically want in a “badass woman.” However, bubbling underneath is a racist, bigoted person who fuels white supremacist ideology alongside Vought. Watching her speak during a newscast is legit like watching Fox news.

What sets The Boys apart beyond its political commentary is how it weaves it together with the glamour of celebrity. Sure, The Seven are superheroes to the public, but it’s all an illusion of great marketing, excellently researched publicity stunts, and distraction. The Seven can take down the proverbial bad guys, but they have to make it in time for their movie premiere and interviews. They are deified and their methods go unquestioned because they stand in the spotlight, seemingly untouchable under the guise of celebrity. The fact that they’re in cahoots with a corporation (and were trying to join the military last season) is a reminder of how intertwined entertainment and politics can be, with The Seven serving as nothing more than a mouthpiece for the far right.

Elsewhere, the Boys themselves are struggling with their own inner turmoil. Hughie (Jack Quaid) is trying to get Annie to obtain Compound V as evidence of Vought’s evil. He’s also frustrated with Butcher (Karl Urban), who initially left them behind and is only back to save his wife now that he knows she’s alive. Hughie’s irritation is understandable to an extent. I mean, the rest of the team is questioning his plans but they’ll quickly follow Butcher despite his hiding pertinent information from them (and being selfish in his endeavors). Their contentious relationship certainly adds another layer to an otherwise straightforward partnership.

On the other hand, the season is much less interested in delving into the Boys’ storylines. Butcher’s anger and mission are pretty much the same as it was last season, only it’s a bit less skewed toward taking down The Seven than before, especially now that he’s found his wife. Hughie hangs around halfheartedly, in part because he’s a wanted man, but also because he’s well and truly lost. Starlight, however, really steps out on her own and is involved in several conflicts with the other members of The Seven (A-Train, The Deep, and Homelander). Meanwhile, Kimiko (Karen Fukuhara) is finally getting her own storyline, though it’s a shame it comes at such a tragic cost.

What’s more, while The Boys does focus on the ways in which white supremacy gains traction, it doesn’t necessarily have anything too deep to say about it. It’s also a bit concerning in that, by painting The Seven and Vought as the source of evil, the show doesn’t stop to critique the Boys’ alliance with the CIA and their attempts to thwart the Shining Light Liberation Army’s plans, all while Vought and their political and media influences go largely unchecked. Not to mention that the only time Arabs appear onscreen, they’re playing terrorists. It’s a hollow take for a show that is trying to be subversive. How can it fully achieve that when the perspectives are still centered on the typical players?

Despite this, The Boys Season 2 expands greatly upon the foundations established in Season 1 and introduces characters who shake things up for everyone. The status quo is shifting and the characters’ journeys along with it. The Boys is still full of disturbing moments and can be excessively and unnecessarily violent, but showrunner Eric Kripke (most famous for bringing us Supernatural) understands how to world-build while simultaneously developing characters and it makes for an incredibly realistic take in a genre that doesn’t often take risks.

The Boys Season 2 is currently streaming on Amazon Prime.

← 'What Movie Could Have Been Over in 10 Minutes if the Main Character Wasn't Such a Fool?' | Shut The Hell Up And Sit The Hell Down, Michael Rapaport →