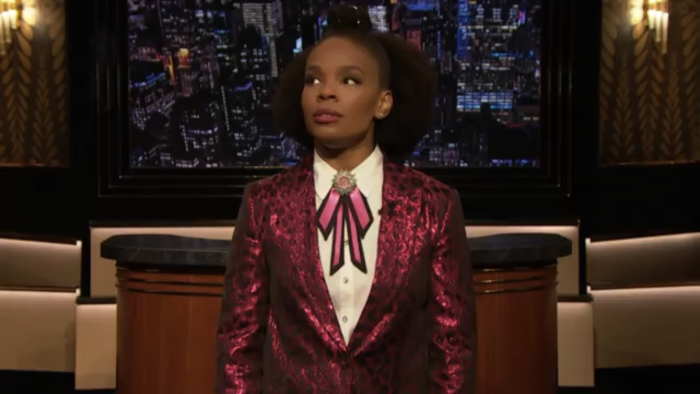 ‘The Amber Ruffin Show’ Is Finally Getting A Live Audience

The Amber Ruffin Show is one of the most high-energy talk shows out there. Amber and her hilarious cohorts bring the funny with song and dance, big sketches, and pizzas to spare (yeah I said it). They make it feel more like a party than a show. Even more impressive is that they’ve done that without an audience. Well, not for much longer!

The show is going on hiatus until August (waaah) but when they return, they’ll have a full studio audience (yaaay)! That’s right, on August 13th, Amber and Tarik will be up to their old shenanigans with people there. To watch and cheer and sing along! Here’s the announcement:

And I am telling you… It's finally happening! Get your tickets for The #AmberRuffinShow at: https://t.co/wsUihIJaUT pic.twitter.com/laR0LKh3dm

As of this writing, you can still join the waitlist for tickets. Just click here. Please believe that I jumped on that list as soon as I could. The Amber Ruffin Show has yet to have an episode with a live audience. Instead, they’ve made it feel like they were performing to a packed house, which is almost more impressive. It’s also not something that everyone has been successful at.

It should come as no surprise that the energy is still high. Amber Ruffin has performed for plenty of live audiences. For my baseball fans (hello, you two), think of the shows she’s done so far as swinging with a weighted bat. It’s harder, sure, yet she somehow makes it look easier, swinging away effortlessly. Now, the weights are coming off, Amber’s stepping up to the plate, and my money says she’s about to crush a home run.