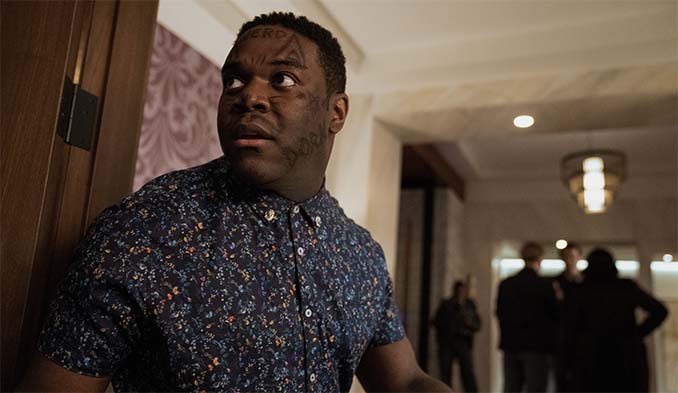 The Afterparty, which debuts on Apple TV+ today, is the most fun I’ve had watching a television show in a long time. It combines many of the things I love — Agatha Christie-like murder mysteries, great comedies, scene-stealing comedic character actors, and wild-party/high-school reunion movies — into one genuinely entertaining series. Think of it as the comedic counterpart to Knives Out. It is a blast.

The series is set in the home of the deceased, Xavier (Dave Franco at this best/worst), a douchebag celebrity popstar pushed off a balcony to his death during the afterparty of his 15th high-school reunion. Tiffany Haddish’s Detective Danner comes in to investigate the murder, which means gathering the stories of all the attendees, all former high-school classmates, each of whom has their own motive for killing Xavier.

The chief suspect is Aniq (Veep’s Sam Richardson), the last person to be seen with Xavier. He attended the afterparty to rekindle his relationship with an old high-school flame, Zoe (Love Life’s’s Zoë Chao), who is going through a divorce from her aggro-husband, Brett (Superstore’s Ike Barinholtz), also a party guest. Aniq is at the party with his best friend, Yasper (Ben Schwartz), an aspiring rap musician hoping to get Xavier to sing on one of his tracks. (Schwartz’s episode is the third, it contains a number of songs, and it may be the most delightful episode of television you will see anytime soon).

The cast is stacked, and while a comedic ensemble this large can sometimes be disastrous, there are no egos here. Everyone gets an episode to tell their version of the events, which means that everyone else plays a minor character in each other’s story. I’m six episodes into the series, and I have no idea who the killer is, but I also don’t care that much yet. What’s fun is watching all the different versions, each written to the comedic strengths of the actor relaying the story. Sam Richardson’s version feels like an episode of a Sam Richardson comedy; Ike Barinholt’s feels like an episode of an Ike Barinholtz’s sitcom, etc., etc. Everyone not only gets their moment to shine, but they also get to do what they are best known for — stealing scenes in other people’s stories.

The idea for the series came from the mind of Christopher Miller (of Lord and Miller fame (Spider-Man: Into the Spider-Verse, The Lego Movie) and was originally conceived as a movie. Miller, who also directs the first three episodes, executes with near perfection (the Lord/Miller connection also allows for a spectacular celebrity cameo opposite Franco in a Hall & Oates movie). What’s doubly remarkable here is that characters you hate in one person’s story you might find yourself sympathizing with in another’s version of events, which will unfortunately invariably lead to heartbreak when the killer is eventually revealed to be someone of whom we’ve grown fond. Though I have not yet seen the finale, it’s also apparent from the writing and set design that there are unnoticed background clues that will eventually point to the murderer — Lord and Miller are known for their attention to detail. The comedy is so good that, even though I’m not here for the whodunnit, I can’t wait to watch it a second time to find the Easter Eggs hidden throughout.

The first three episodes of The Afterparty are available now on Apple TV+. Subsequent episodes will air weekly.


← Okay but Have You Ever Seen an Orangutan Rocking a Pair of Sunglasses | Bullet Points: Momoa Vrooms, He-Man Finds Its Lead, and Jesse Eisenberg Is 'In Trouble' →