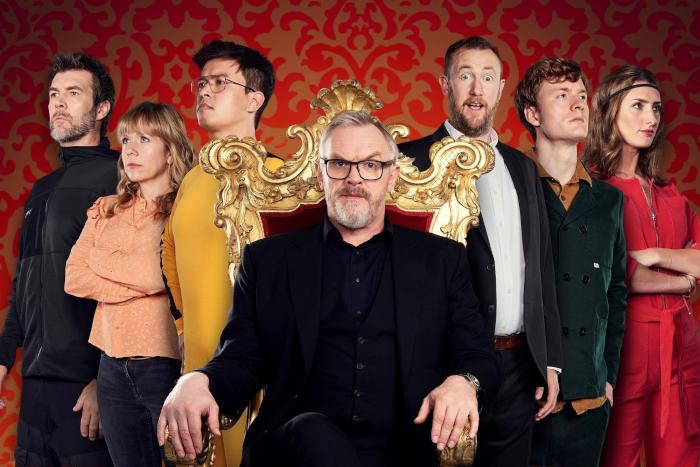 I have mentioned this before, but my family likes to watch one show a night together as a family, and finding something suitable for 8-year-olds, a 13-year-old, and their parents is not always easy. We tend toward the non-trashy reality competition series: Amazing Race, Survivor, Top Chef, GBBO and also Nailed It! and Queer Eye. As the pandemic set in, and it became apparent that we as a family we’re about to run out of episodes of our favorite shows, I became concerned, because — especially during the Covid-era — spending this hour each night with my family on the couch watching a show we could all invest in has been hugely important. It’s not just the experience of watching the show itself, but it’s also in converging around one or two characters as a family, or having something we can always talk about together, even when we watch our separate shows during other times. It means a lot. Truly.

When the 40th season of Survivor ended in May, we didn’t have another show lined up, until Lainey kindly suggested to me that we should check out a British panel series called Taskmaster, the first seven seasons of which are on YouTube. I did so more on a whim than anything, and because Lainey wouldn’t stop pestering me to try it. I asked Lainey if there was a season we should start with, and she said that it didn’t really matter, which I soon learned to be completely accurate (the seasons vary in quality, but they’re all good (except series 6), and watching it all from the beginning is probably for the best because, after a few seasons, the show starts to feel like family, and it’s important to know everyone).

But what is Taskmaster? It is a profoundly simple game, which is perhaps what makes trying to describe its appeal so difficult. Back in 2010, a comedian named Alex Horne began sending his comedian friends bizarre tasks to do over email each month, and at the end of the year, at the 2010 Edinburgh Festival Fringe, everyone got drunk, and he showed how all of his friends tried to complete the tasks. It was so popular, he did it again the next year, and by 2015, he’d adapted it for television, and in September, the series will embark on its 10th seasons.

How to accomplish the individual tasks is always left up to interpretation, and Greg Davies — a host who is strangely both warm and vicious in how he handles the players — scores each player based on how well they complete the tasks, and at the end of the show (and at the end of each series) a winner is crowned. There is no real prize, aside from a bronze bust of Greg Davies’ head, and it’s clear every season that there’s at least one or two players who do not give a sh*t about winning, while there is always at least one player so dedicated to winning that they often forget to play the game in the spirit in which it is meant to be played. The gunners tend to be my favorites. Alex Horne himself plays the put-upon assistant to the Taskmaster, which is amusing in and of itself because Horne created and writes the series. I don’t know Davies outside of this series, but he really does have the best job on television. He doesn’t have to design task or complete them; he can simply sit back and mercilessly mock the efforts of others.

After each task, the comedian contestants watch themselves along with Davies and react accordingly, while Davies usually insults them either brutally or good-naturedly. The players are comprised of British comedians and other assorted personalities, most of whom won’t be recognizable to American audiences, although it is my understanding that they’re all fairly well known in the UK, often from other panel shows, which is sadly a thing we just don’t really do in America. I’ve had a passing familiarity with a few of the players: Jo Brand (mostly from Graham Norton), Noel Fielding, Sally Phillips, and Joe Thomas (from The In-Betweeners), although the only player I’ve been strongly familiar with is Aisling Bea, who I know and love from a few British television shows. She is also one of my favorite players all-time here along with almost too many to name here, except I must single out Romesh Ranganathan, Katherine Ryan, Mel Giedroyc, and the entire series 7 cast, but especially James Acaster.

The tasks themselves, however, are often the star of the show, both because it’s fun to try and work out how we might accomplish the tasks, but also to watch the players often humiliate themselves trying to complete the tasks. There have been dozens of tasks over nine series, and trying to describe them in writing will not do them justice. Here is an example from season 2, however, that best encapsulates the lateral thinking that is required.

How the players compete in the tasks, and how those same players react to watching themselves from the studio combine to make up Taskmaster, and maybe no task in the history of the series best encapsulates both aspects of the series better than this task from the series two premiere. The episode with this task is the one my family encourages other people to watch in order to get them hooked on Taskmaster. The show is not always this good — this is the best 12 minutes in the show’s history — but there are a lot of other moments that come close.

The CW began rebroadcasting episodes of the series last night in the States, beginning with Season 8 (a decent season, but a weird one to start with for American audiences). I’m glad it’s getting some play over here on an actual network, although The CW hosted an American version of the series a few years ago that crashed and burned, like most adaptations of British series. Mostly, however, I think it’s great that rebroadcasting the show on The CW will allow new people to discover the show and go back and watch from the beginning (again, it’s available for free on YouTube). The show has really been one of the highlights of the pandemic for our family, although I should note for others who might consider watching it as a family: There is a lot of profanity, for those who have children unaccustomed to hearing it from their parents all day long. I cannot stress enough, however, how valuable it has been over the last 3 months for my family to be able to sit down each night and laugh hysterically together, and I hope as many people as possible will partake in that joy.

I’ll end with this: One of my favorite tasks from season 1.

← Dany Garcia Is The First Woman To Own An Entire Sports League After Buying The XFL With Dwayne Johnson | 5 Shows After Dark: 'I May Destroy You' on HBO, '31st Annual GLAAD Media Awards' on Logo →