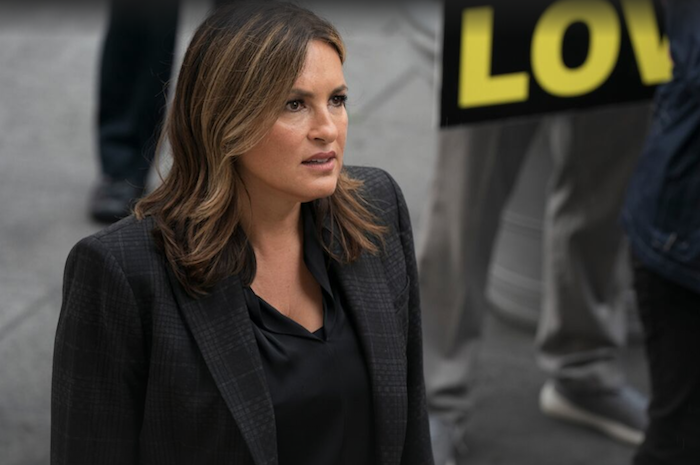 If you’ve watched SVU long enough, you start to notice the signs of what will (or won’t) be a good episode. One such sign is a musical montage, which they started doing post-Stabler, and in my estimation is always the sign of an OK-at-best ep. Well, this ep had a montage in the cold open, so right off the bat, I knew what we were working with.

Let’s focus on the positive. The squad has a new member — Detective Katriona “Kat” Azar Tamin, portrayed by Jamie Gray Hyder — who is going to be assisting on a provisional basis. You may recognize her as the undercover cop that helped take down Ian McShane’s character in the season premiere. She ripped into Carisi over abortion rights and his perceived, personal anti-choice views (more on that in a moment) so I like her already. I miss Munch spouting off government conspiracies apropos of nothing, so I’m down with a detective who runs their mouth and doesn’t care about the consequences.

In case you missed it, Officer Kat Tamin came in HOT last night, as a new addition to the squad room on @nbcsvu. #SVU #SVU21 • I have been sitting on this for months, and couldn’t be more excited to be part of such an iconic show for this historic season. This job follows one of the toughest stretches of my career. You never know what’s on the other side of the dark times, so push through the discomfort and you just may surprise yourself :)

That said, there’s something I have to bring up this season about the way they are styling (or the complete lack of styling) certain female characters’ hair. They did Tamin dirty with the lighting/style of her hair, and they have consistently done the new ADA Hadid equally as dirty. I don’t know if they suddenly don’t know how to work with dark brunette hair, or if they don’t know if they want to keep the characters around so they’re not bothering yet, but it’s extremely noticeable to me. To the point in Hadid’s case, that I feel like they could get rid of her at any moment because of the lack of effort they’ve shown over the past four episodes. Now they’re doing the same to Tamin, it’s even harder to ignore. This is a show that has always highly stylized their female characters’ hair, so to give up now, 20 years in, on two new characters? It’s weird. I may be the only one who’s noticed but it bothers me. They are both good looking ladies, do them better than this, dammit! Especially because Benson and Rollins have fancy, styled, flattering hair per the SVU norm. OK, rant over.

Matt Saracen from Friday Night Lights is a damn rapist and it sucks—but I’ll backtrack. A 13-year old girl from Ohio has ran away to New York to seek an abortion because her sh*tty stepdad has been serially abusing her since she was 11. This is all complicated by the fact that of course the family are Christian fundamentalists that believe abortion is murder and that men should run the household.

Anyway, the detectives are alerted by her parents that the teen has run away because everyone thinks she’s gone to live with a pervy 19-year old from her hometown that the teen used to hang out with. No one knows she’s pregnant or that her stepdad is the one who did it, but we’re about to find out the first. See, once the detectives track her down, she faints (a handy plot device) so they take her to the hospital and they find out—not only is she pregnant, but that she’s a victim of serial abuse. The teenager refuses to say who has been abusing her but anyone who watches this show knew it had to be the stepfather or possibly the preacher that had a fairly prominent role in the first half of the ep. There is a method to the SVU madness.

Since the family are fundies, they are freaked out about the fact their daughter wants an abortion and go to court to try to stop it—where of course the 13-year old spontaneously admits that it was her stepdad that’s been doing the abuse.

The court is about to rule that the teen can get her abortion when a lawyer from Ohio dramatically enters the courtroom and tries to have everyone arrested for following New York abortion law when they should be following Ohio abortion law … in New York?! (I was unclear what exactly his job was, other than to be a jackass, so his standing to burst into a court room will have to remain a mystery.) Yada yada yada, they have a hearing to see if New York officials can be extradited to Ohio to face criminal charges because Ohio is much more facist when it comes to women having control over their bodies. The case, of course, gets dismissed and the judge who rules on it was awesome. I hope we see more of her, she was not having any of that bulls*it. It is my wish that SVU once again builds out a roster of judges they use frequently, like they did in the old days—I want more of her!

Anyway, it’s clear to anyone with half a brain cell that the Ohio lawyer is there to run out the clock with motion after motion (he still has a case in family court) so that the teen can’t get an abortion because she’ll be too far along. Carisi confronts him (remember, he’s a lawyer now) and reveals that, twist—his own mother had an abortion because she was told that the fetus was not compatible with life and that if his mother had been able to deliver the fetus to term, any sort of life the fetus had would have been unbearable. Which, ugh. F*ck you—there is no such thing as a good or bad abortion reason. It’s none of anyone’s business, period. However, this such appeal works to Ohio lawyer because only men can convince other men that women should have control over their bodies (but only in very specific instances, apparently) and he drops all this bulls*it so the teen can get an abortion.

Now, we only have to solve the issue of the fact the teen’s mother is a brainwashed sh*tshow who wants to stand by her man, but we’ve got like 3 minutes left in this ep, so enter Captain Benson! After a come to Jesus with Saint Olivia (I love her, this is not a dig, trust) the mom is like “Yes daughter, I will believe you now, leave my husband, and not force you to bring a child to term that you don’t want and was a byproduct of rape.”

So, yeah. This was an abortion episode. They tend to do one of these every few years or so, and since we don’t have “I’M AN ANGRY CATHOLIC WITH FIVE KIDS AND I SHOUT A LOT” Stabler around anymore to stump for anti-choice, we have to get creative with how we show both sides of the argument. Personally, I don’t think there are two sides to this argument so I find it all unnecessary. That’s because I believe I should have control over my body and no one else should get a say in that. Go figure.

Anyway, since this was a montage episode, it was never going to be great. We focused a lot on people’s opinions (I mean, it’s an abortion episode, everyone has an opinion, right?) so this was less about the crime and more about personal stuff. The personal stuff eps are never as good as the eps where 7 people turn up dead and it turns out that someone dipped their cat’s nails in poison and let them run loose in a book shop because their husband was cheating on them. I want more of those eps!

One last thing, I failed to mention is that Mariska Hargitay’s real-life, foxy husband made an appearance as the teen’s pro-bono lawyer. It’s always good to see him pop up. He started out as a jerk who represents privileged clients and as the show has progressed, we’ve seen him become the “good” defense attorney and be the go-to when the squad thinks someone needs a pro-bono lawyer to advocate for them. Yes, friends, if you watch this show on the regular, you even notice the defense attorneys and the types of clients they represent.

Here’s hoping next week’s ep is a more bananas than this week’s and that Fin has a larger role to play since he and Benson are my favorite.

← Review: Every Single Person In 'Maleficent: Mistress Of Evil' Deserved Better | The Trump Presidency is a Disaster →