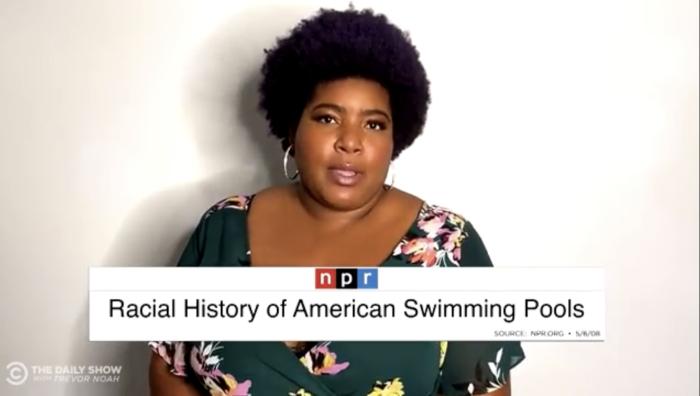 Surprise! Public Swimming Pools In America Have A Racist History

I’ll be honest, you’re not going to catch me dead in a public swimming pool. I can swim. I just have this thing about not wanting to drink a stranger’s urine. No kink-shaming here! If that’s what you’re into, awesome. Just not for me. However, my rule against digesting others’ bodily fluids may change now that I’ve learned white people have been trying to keep Black people out of their pools since World War I. Just ask The Daily Show’s, Dulce Sloan.

In a new segment, Sloan broke down the racist history of public swimming pools in America. The details are unsurprising at best, and infuriating at worst. White people wanted a monopoly on public swimming pools. When Black people wanted equal access, white people said, “Fine, we’ll just make our own, private, club pools.” Why share something when you can just keep it for yourself? America!

I have no interest in public swimming pools. I have even less interest in country clubs, which became the haven for white pools. I do have a sudden urge to find as many private club swimming pools as I can and helping to fill their diversity quotas. Going places I’m not wanted is kinda my thing. It has been since I showed up at Anastasia’s birthday party in the third grade.

Your mom invited everyone, Anastasia; don’t be mad at me!

In all seriousness, the segregation of swimming pools is another in a long list of public things Black people aren’t granted equal access to. Because of that, Black children are less likely to know how to swim and therefore more likely to drown. Consequently, racist white people can keep propagating bulls*** myths about Black people not being able to swim without addressing the root of the issue.

Racism, like time, is a flat circle. Unless we break that circle, it will keep on … circling. So, I’ll see you in the pool!