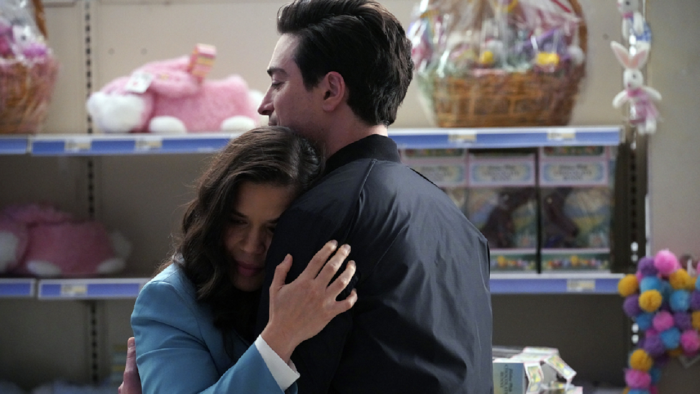 'Superstore' Will Probably Break Up Amy and Jonah. Thanks, I Hate It

Thanks to a months-long production shutdown, Superstore had a shortened Season 5. Fear not, though, because the beloved sitcom is back for Season 6 and ready to tackle the pandemic — the forgotten frontline workers were the retail heroes who had to deal with the anti-maskers and consistent toilet paper shortages. Of course, Superstore also had to contend with Amy’s impending move to California and what that ultimately means for her romance with Jonah.

At the end of Season 5, Amy’s decision to take the corporate job on the west coast put their relationship in a weird spot. Would Jonah go with her? Would they keep things long distance? Yes, Jonah decided that he was all in and reiterated that they would be going to Cali together. In the Season 6 premiere, Jonah is ecstatic about setting off on a new journey together. When he goes in for a hug, Amy’s face is… well, it’s not the face of someone who is happy to start a new life with her boyfriend. Rather, it is a face of someone terrified at the prospect.

Superstore’s co-showrunner Gabe Miller implied that the moment made Amy realize that she has some things to think about now that the move is actually happening after such a long delay.

“What we’re seeing in that moment is that maybe there’s a lot of stuff that Amy has been putting off thinking about. Because the move has been delayed for so long, now that it’s real, she is realizing there are some things… that she needs to confront.”

Does she need to confront that she and Jonah can no longer be together? TELL US, GABE! I can’t say for sure, but this take pretty much spells doom for the couple, who have been together since the very end of Season 3. Original showrunner Justin Spitzer once compared their relationship to The Office’s Jim and Pam in that Amy and Jonah would go through trials and tribulations, but would never actually break up. It was a relief because so many writers still think that relationships are only interesting when they’re not actually together. However, those days of Superstore bliss seem so far gone now considering the circumstances.

The hard truth is that America Ferrera is leaving Superstore behind and, since Ben Feldman will remain on the show, their characters’ romantic relationship seems destined to sink to the bottom of the ocean. I hate it. I hate it with every inch of my being because Amy and Jonah were THE cornerstone of the sitcom.

Yes, it’s an ensemble, but it was held together at first by the audience’s investment in their will-they/won’t-they relationship and the show lost some of its shine in Season 5 when the focus moved away from them. At this point, I don’t see them having a long-distance relationship — Amy will be too busy with her new job and raising two kids. Jonah will be working too and continuing his union endeavors. It may well and truly be the end of this beautiful relationship (and one of the best in a sitcom in quite some time). I will tune in to watch Ferrera’s goodbye episode, but I will also have a box of tissues nearby just in case.

← The Weird History and Allure of the Sexy Halloween Costume | A Legend Is Gone. Sean Connery Is Dead At Age 90. →