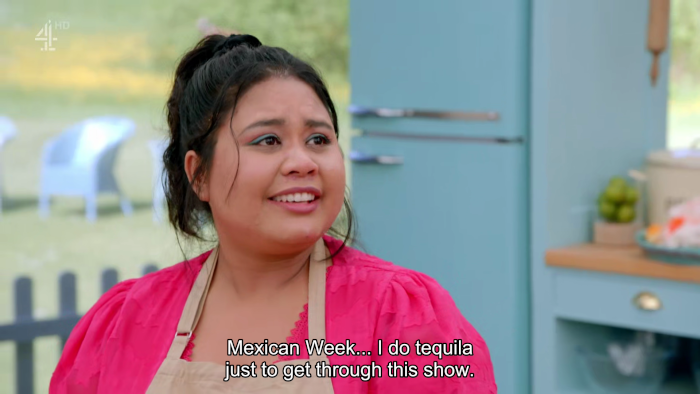 The first thing I need to clarify is that I don’t follow The Great British Bake-Off and I know very little about it. In theory, it should be my jam, as someone who loves baking and likes reality competitions featuring talented people, but it isn’t. The second thing I should clarify, if you are new here, is that I am not Mexican, I’m Chilean. Opposite hemispheres, different continents, and somewhat different histories. But the cultural ties go deeper than the shared language and the psychological scarring at the hands of the Catholic Church, which already should be enough. In short, Mexico’s cultural influence is to the Latino world (including Brazil and Haití) what the US is to the Anglosphere for obvious reasons; they are an Empire on their own. Latin America has been raised and fed on Mexican culture since at least the 1920s. Also, Chile and Mexico have always had a unique and special relationship, partially founded in our resentment towards Argentinians.

So, while I’m certainly not a specialist in Mexican History and Culture (damn, I regret not taking that elective course at Uni), I think I’m qualified enough to dunk on The Great British Stereotype-Off we experienced a few days ago, with their first ever “Mexican Week.”

I’ll be honest, it could’ve been worse. MUCH worse. Because when it comes to globally popular British shows insulting Mexican people, you can’t do worse than Richard Hammond. I’ll let the American readers google that reference.

This is not to say this was a terrible idea from the beginning. It opened with the hosts, Noel Fielding and the guy from Little Britain wearing ponchos and sombreros charros. Here’s a tip for all Anglos: Sombrero is the catch-all word for “hat.” What you call sombrrerrrous refers to the ones used by charro horsesmiths, with dozens of regional variants. Also, those ponchos (actually, sarape in Mesoamerica) look tacky as hell, probably bought from a costume store. 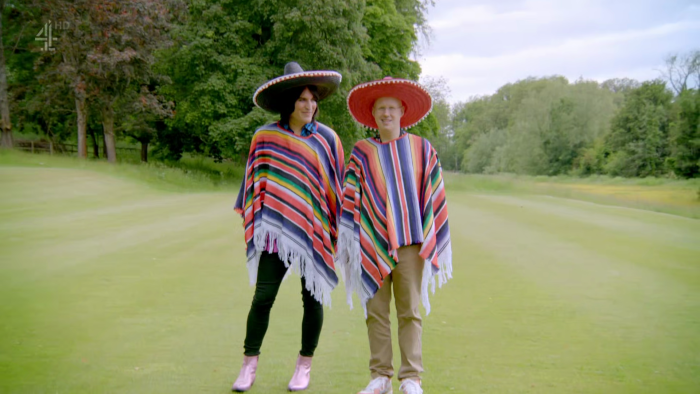 They followed that with a lame “not even Juan joke about Mexico?” joke, which set the tone for the rest of the episode: Lame, lazy stereotypes. The dad-est of lazy stereotyping. You might reasonably think that all stereotypes are lazy, but I’d disagree. Good comedy always relies on stereotypes in order to work, but it’s the insight of the one making the joke that makes the difference in how you use a stereotype. Case in point, the entirety of Jewish Comedy. Neither the writers of the show nor Noel Fledgling nor the guy from Little Britain have the insight or care enough about Mexico to come up with something other than dull references that elicit nothing: The guy from Little Britain shaking some maracas (a staple of ALL Latin music), the “Mexican or a Mexican’t” joke which, in the mouth of a Brit, sounds like a seven-year-old rapping. You need to be Chicano to pull it off. Maybe they were all terrified of treading into full-Richard Hammond territory, but instead, all they offered were unmemorable edgeless jokes. That is an absolute comedic failure.

However, it was the actual competition where Britain’s absolute disconnect with Mexican culture came to the fore. I can’t fault the contestants; they clearly did their best and actually came up with some interesting takes on Mexican bakery and cuisine. They are all too talented to completely Brit-up Mexican staples. Also, let’s give them some credit for trying to pronounce things like guacamole or pico de gallo; it’s not their fault that the Anglo world decided to base pronunciation on Common Law.

The real problem was the judges, which I’ll be calling British Guy Fieri (how original!) and the Afrikaner Lady. Noticeably absent, an actual Mexican culinary specialist as a guest judge, which apparently is not a thing they do in GBBO. If there were ever a moment to make an exception, it should’ve been Mexican week, as a matter of principle, but also because I’ve never seen more unsuitable people to judge Mexican food than this duo.

To be clear, I’m only calling the judge British Guy Fieri because of the physical resemblance. The real one would know what Mexican food is.

In short, Afrikaner Lady and British Guy Fieri spend the whole time criticizing the creations from their uninformed ignorance, from complaints about things having too many flavors all jumbled together (THAT’S LITERALLY WHAT LATINO CULTURES ARE ABOUT, AFRIKANER LADY), to acting all shocked and awed when the chili spicing hit them, FOUR TIMES OVER (DO YOU EVEN KNOW HOW MEXICAN CUISINE WORKS, BRITISH GUY FIERI?). 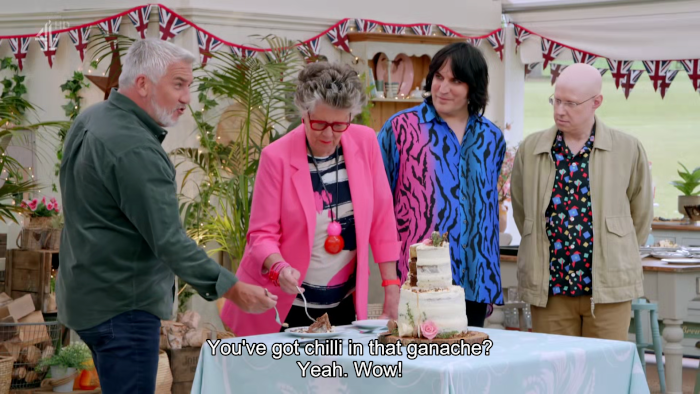 It’s not that the judges should’ve known better; it’s that they didn’t apply the Socratic principle to realize their known unknown: Cordon Bleu and haute cuisine is not a good framework to understand cuisines like Mexico’s.

The opening challenge consisted of baking pan dulce. I don’t have many notes here, mostly because the contestants came up with their best ideas and there were some basic-ass shoutouts to Mexican culture (baking them as cacti or corn-based designs). They knew their besos from their conchas. It happened to be the only part of the show that will actually be funny for Latinos, what with how the contestants talk about their conchas. You know what I’m talking about.

The Technical Challenge involved making classic tacos from scratch. Again, everything they did looked pretty, pretty good, which is the actual spirit of Mexican cuisine: you let the color of the ingredients do the presentation. Did they all overstuff their tacos? Absolutely, but they probably weren’t told that a tortilla won’t behave like a crepe, or that you eat them with a fork and knife. Did they focus too much on making sure the steak was fried properly and medium rare, even though a casserole-style is better suited? Yes, but also, they didn’t have enough time to do a proper slow-cook. There was not a single clavo de olor in sight under the tent? Yes, and that’s unforgivable, but that’s an L on the production department. Did the judges complain about the tacos being overstuffed even though they gave the contestants no guidelines? Yes, but the worst part is they complained about some contestants over-seasoning the taco while praising the medium rare meat filling when it should be the other way around. This is street food, people; we want to minimize risks!

However, I am a patient man, but there are some things you cannot let pass. As is usual when it involves Anglos and Latino cuisine, avocados were the victims. No, it wasn’t the part where one of the sweet old contestant ladies peeled them:

There are many offensive moments in the Great British Bake Off's "Mexican week" ep, but on the very minor side, peeling an avocado like a potato is sending me pic.twitter.com/RqdTZTvoSd

We need to give up Gente Querida. Even though avocados were bred into the second easiest fruit after bananas, Anglos have a need to approach the foods of the other as if they were objects beyond the comprehension of mere mortals. The wielding of a sharp object is highly recommended for protection.

No, the worst part was the contestant who, apparently, admitted to putting the avocados through a blender. I say “admit” because even though she was nonchalant about her confession, this is a crime against not just Mexican culture, but the entire culture of the Americas. 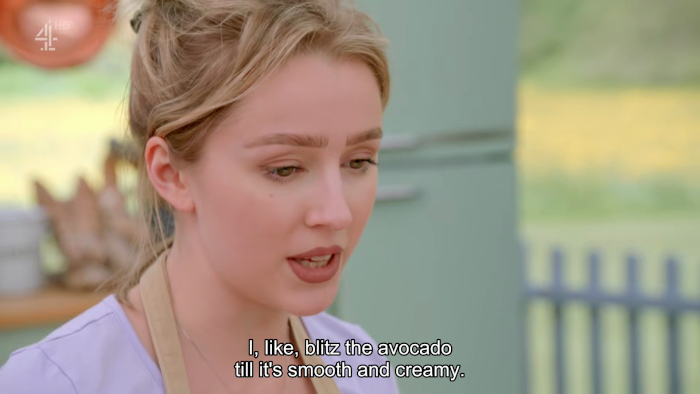 The Showstopper Challenge had them prepare their own take on the tres leches cake. Once again, they held up fairly well. I mean, tres leches is more of a Latin American staple than a Mexican one, and one in which simplicity is always paramount. It is to our culture what brownies are to Anglo culture: You can make them blindfolded, you need only the most basic of ingredients, and there’s a lot of room for failure because it’s never supposed to be structurally sound. It’s more of a dessert than a cake, the kind served in small plastic containers so the milk mixture is contained and drinkable.

Cue in the contestants doing things like this: I admire the effort, but these are not the cakes you are supposed to overthink. Also, chocolate with tres leches? There’s no consensus on the matter, but we err on the side of better not: 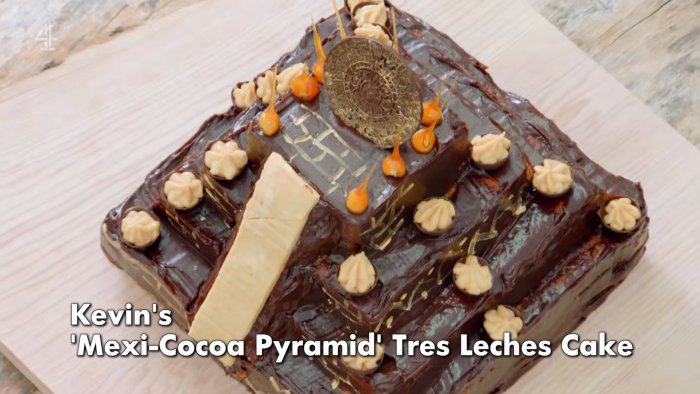 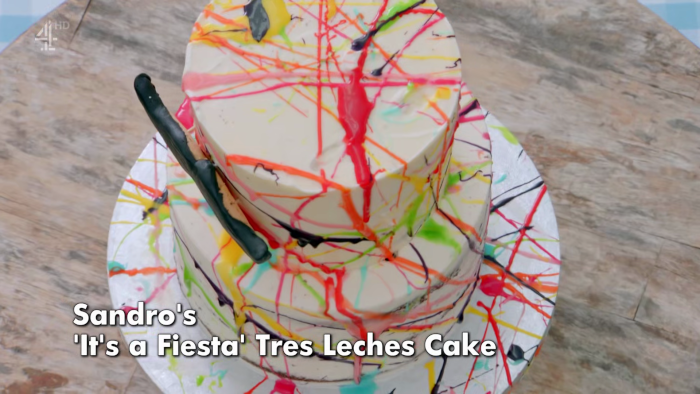 Also, if I may put pause on that last cake … what’s up with the freaking mustache? Because Sandro, my man, that’s not a Mexican mustache. A proper Mexican mustache looks either three times thicker than that or has very thin stripes.

Mexican restaurateurs in the UK have voiced their irritation at this edition of GBBO and no wonder, considering how hard it must have been to introduce this whole world of flavors to people who, as the joke says, invaded the whole world in search of spices they don’t even use.

I would say there’s something particular about Britain’s inability to understand Mexico, more so than white Americans. For some reason, Mexico seems to them as the most foreign and unintelligible culture out there, despite being closer geographically than any of the places they colonized. Maybe it’s their love-hate relationship against anything in any way related to Southern Europeans. Maybe it reminds them that their success in colonizing North America is because the whole subcontinent plays on easy mode, same thing with their 19th Century success, led by industrialization, repeating rifles and rails. Maybe because it’s a culture where they didn’t have hegemonic control (though neither did Spain, eventually). Maybe it’s because of the mestizaje, flying in the face of the black and white Victorian mindset, what with all its nuances and richness.

Or maybe it’s because — and I say this from a place of love and utmost respect — Mexico thrives on being colorful, expressive and anarchic, in a good way, the political one. All three are perhaps too much for the average Brit, whether they’re country folk or London cosmopolitans*.

At the very least, they didn’t make any jokes about Cartels and drug trafficking.

(Yeah, I know all those are stereotypes. How you like them apples?)


← Review: 'Derry Girls' Delivers a Cracker Final Season | 'Arrow' 10th Anniversary of Green Arrow Telling His Enemies That They Have Failed This City →