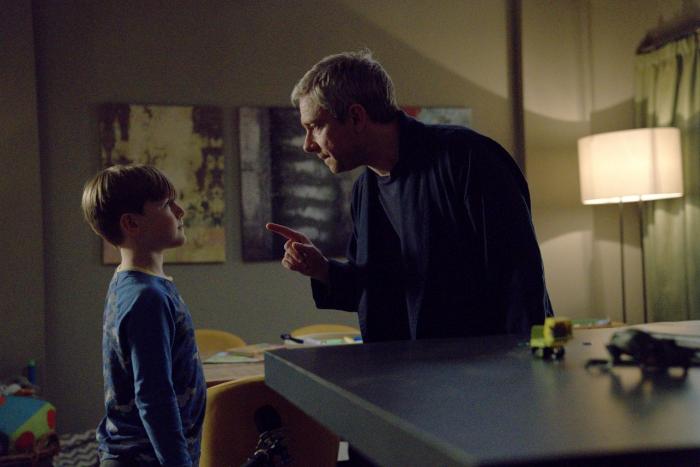 Stream It or Nah? What FX's 'Breeders' Gets Right About Breeders

There’s a fantastic scene in Judd Apatow’s Knocked Up where Paul Rudd sits on a park bench and marvels, “I wish I liked anything as much as my kids like bubbles.” The Breeders equivalent to that scene would involve Martin Freeman’s character screaming at his kid in the park, “JESUS F***KING CHRIST. HOW MANY TIMES DO I HAVE TO TELL YOU TO STOP PLAYING WITH BUBBLES? NO, SERIOUSLY? HOW. MANY. F**KING. TIMES?”

Breeders — created by Simon Blackwell, Chris Addison and Martin Freeman, the latter of whom also stars as Paul alongside his wife, Ally (Daisy Haggard) — is meant to be a brutally honest examination of parenting. Based on the first two episodes, it overshoots the mark. Kids are annoying, expensive time-sucks, but there’s a difference between feeling occasionally exasperated by them — as all parents are — and wallowing in the existential despair of parenting, which seems to be the approach taken by Breeders.

The opening episode of the series tracks a night in which Paul and Ally’s kids cannot fall asleep, and how the two of them try and deal. Paul and Ally have a funny and familiar conversation about whose turn it is to stay up with them, who needs to sleep the most, and who has slept the least. There’s also another great, familiar moment when their daughter yells at Ally when she nods off while telling her a story. “MOMMY WAKE UP!”

It’s Paul’s character, however, that pushes the “honesty” too far. We’ve all lost our cool, yelled at our kids for doing innocuous things, and felt bad about it afterward. But that’s Paul’s defining nature in Breeders. He suffers from rage issues. It’s less funny and more uncomfortable, but not uncomfortable in The Office sense, but uncomfortable in the “NO WIRE HANGERS EVER!” sense. It’s too much.

The material, however, is there for a great show about parenting. Daisy Haggard — who was phenomenal in last year’s Back to Life — is likewise very good here, along with the exemplary Michael McKean, who plays her layabout father. But the tone is too dark, too wallowing, and it’s punctuated by an almost mean-spirited performance from Freeman. Ally and Paul should feel like people other parents can relate to — and sometimes we can! — but too often, they feel like parents upon whom we should be calling child protective services. If a show only captured my worst moments as a father, it might look like Breeders, but it needs to be offset with the wonder of children playing with bubbles, or the euphoric feeling of two parents working in tandem to raise their kids.

I’ll give Breeders a few more episodes to come around on that perspective, but based on the first two episodes, I don’t really need to watch a series that belabors the misery of parenting. For non-parents, there’s little here with which you can relate, while for parents, these characters — and specifically Paul — are not really someone with whom you can empathize. There’s a happy medium somewhere between the kind of consumer entertainment that romanticizes parenthood, like Parenthood, and FX on Hulu’s new series, Breeders. In fact, for an honest depiction of parenting that is funny without being mean, that is soulful but not nihilistic, Pamela Adlon’s Better Things remains the standard-bearer.

← Casting Director Claims Adèle Haenel's Protest Against Roman Polanski Killed Her Career | Where Are They Now? Why These 18 Winners Were Not Cast in 'Survivor: Winners at War' →