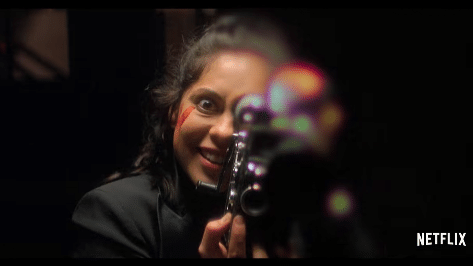 Before I get into my thoughts on Netflix’s creepy new magical revenge thriller, Brand New Cherry Flavor, I want to mention that I have never read the book. All of my impressions are based solely on the show. Additionally, I want to give a content warning, for the show, for elements of body horror, and a really bad beating our protagonist takes in the 5th episode.

Brand New Cherry Flavor owes a lot to David Lynch. The way that light and color palettes are used as scenery to build characters and also to denote the passage from one world into another is something that Lynch has mastered through his career. How music and sound — or lack thereof — emphasize the terrors hidden in our mundane world and in plain sight in the occult world that the main character, Lisa Nova, finds herself traveling through. How easy it is to slip across the boundary from one world into the other when you follow your worst intentions is also a reoccurring theme in Lynch’s work. By episode four, I was already planning a rewatch of Mullholland Drive and Lost Highway.

When we’re introduced to Lisa Nova, a student filmmaker on her way to LA for her Big Break, she seems like a person who is used to bad things happening to her. She’s low energy and can’t muster excitement even as it seems like her Hollywood dreams are about to come true. It’s no real surprise when an actual bad thing happens to her. What is surprising, and what causes her to cross the threshold into the arcane, is the strength of her desire for revenge. The farther down the rabbit hole she travels, the more Lisa comes alive. Rose Salazar, who you may remember from Alita: Battle Angel, is at her strongest and most interesting here when Lisa is fully in the grip of spiritual madness. Perhaps Lisa is tied into the mystical and Boro is not so much helping her as she is feeding off of her. There are a lot of references in the story to Lisa’s childhood in Brazil, her mysterious, absent mother — who may have been some sort of deity herself — and dreams of the forest where a faceless entity tries to communicate with her. The more we learn about the movie Lisa made, and the effects it had on the actress who starred in it, the more we come to understand that Lisa’s power is what caused Boro’s attention to fall upon her in the first place. 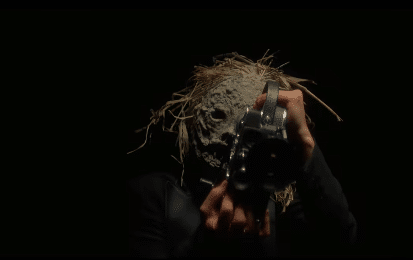 Catherine Keener plays Boro, who presents herself to Lisa as an eccentric L.A. weirdo but is actually a 900-year-old spirit who has been hopping bodies and creating zombie servants for herself. This is the creepiest thing Keener’s done since Get Out. It’s fun to watch her lean into the craziness of this overly dramatic, witchy role even as you grimace at her blood-harvesting ways. The curse that Boro puts on Burke for Lisa involves a ritual and Lisa must consume something called “Balché stew” that makes her hallucinate and also vomit kittens at random intervals. The kittens are the payment owed to Boro for her services. I’ve eaten more than my fair share of hallucinogens and I’ve never once vomited up a kitten. I’m not sure if I’m more relieved or disappointed. At any rate, the kittens are important. 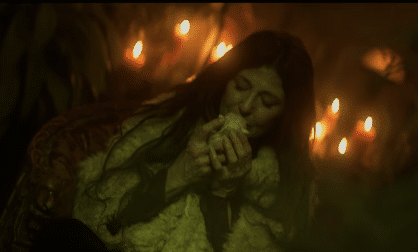 Eric Lange is the sleazy movie producer, Lou Burke, trying to pull himself back from the precipice of being washed up by latching on to Lisa’s short film. He is the quintessential cokehead Hollywood type waiting to screw you over at the first opportunity. He thinks the curse is all a joke until he can no longer deny the horrific forces acting against him. But by then, he and Lisa are trapped in the symbiotic relationship created by the revenge ritual. Lisa’s quest for revenge feeds Lou’s anger and his own desire to both get back at her and get his life back from her. As they fight against each other, to extricate themselves from each other, their lives become more entangled. As their various methods of revenge play out, the greater the stakes become for the people around them, leading to a lot of violent, bloody death and dismemberment.

Manny Jacinto has a small role as Lisa’s ex-lover, now a high-end LA drug dealer and provider of her crash pad when she first gets to town. There’s not enough of him in this show, but I understand there’s some OTHER show on some OTHER streaming service that rectifies that issue. Jeff Ward is perfect as the Himbo movie star, Roy Hardaway. He finds himself drawn, unwillingly, into Lisa’s black magic. By the time he figures out what’s going on and that he wants nothing to do with it, it’s far too late for him.

I think this is the weirdest thing to come from Netflix since Hemlock Grove. The ending of this season leaves a lot of room for a second. But, based on the law of diminishing returns and Netflix’s history of allowing promising properties that skew this strange fall apart at the seams, we may be better off letting sleeping kittens lie. If you’re not squeamish about blood and enjoy a messy bit of mind f**kery, Brand New Cherry Flavor is a must-see. But it’s definitely not for everyone.

← The Sad, Sad, Sad World of GOP, Far-Right Cameo | Minnie Driver Recalls a Magical Moment with Robin Williams on the Set of 'Good Will Hunting' →