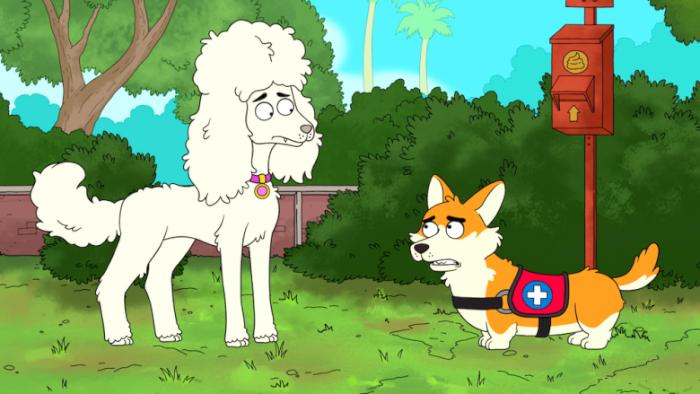 Stream It Or Nah: 'Housebroken' with Lisa Kudrow, Clea Duvall, Jason Mantzoukas, and Will Forte

Fox’s new animated series, Housebroken, comes from two writer/producers on Veep, Gabrielle Allan and Jennifer Crittenden, as well as Clea DuVall, an actress on Veep who also wrote and directed The Happiest Season. With that kind of talent behind the camera, you might expect something irreverent and subversive, but Housebroken — or at least the pilot episode — is more straight down the middle than what one might expect. I would describe it as something akin to an animated show that combines the touchy-feely absurdism of Portlandia with the fart jokes of Seth MacFarlane.

Whether that’s a good or a bad thing, I suppose, depends on how fond one might be of pet-based humor. In the series, Lisa Kudrow plays a poodle named Honey, who uses skills she picked up from her therapist owner to host group therapy sessions for the neighborhood pets. In the pilot, Honey herself is going through the stages of grief after losing her best friend, and instead of processing the loss appropriately, Honey is quick to bring in a new group member before the other pets are ready.

Those other pets include a big, dumb St. Bernard played by Nat Faxon (easily the show’s funniest character), a woke service dog voiced by DuVall, and a horny turtle (Will Forte) who wants to bang a croc. Jason Mantzoukas plays the same character Mantzoukas always plays, only he’s a cat; Sharon Horgan plays a cat on whom Mantzoukas’ cat has a crush; Tony Hale plays an obnoxious pet owned by George Clooney; and Brian Tyree Henry plays a Coyote on whom Honey has a crush. (Side note: Is Mantzoukas now contractually obligated to appear in every animated series? Not that I’m complaining.)

There’s a lot of great voice talent here, and were that enough for a show to succeed, Housebroken would be an all-timer. Alas, often the most compelling part of the series is trying to suss out who the voice actors are without looking them up. Also, counting the number of times that Nat Faxon’s dog farts (or eats his own barf) — the dog farts and the barf eating, ironically, are also the funniest moments in the pilot. Everything else seems to want to be Bojack crossed with that Matthew Perry therapy series, Go On, but it’s not nearly as good as either.

Alas, however, it is only a pilot episode, and obviously, with Veep-caliber talent behind it, it probably has a very high ceiling for a cartoon about pets in group therapy. It’s unlikely, though, that it will have much of an opportunity to achieve greatness. Fox debuted it on the night of Memorial Day, where it premiered with less than a million viewers, and the pilot episode, anyway, doesn’t provide much by way of an incentive to proactively seek it out before Fox pulls the plug on it. I’d be hard-pressed to call its inevitable disappearance disappointing, but I will be bummed that we may never know what becomes of the love between a turtle and a croc with a poop emoji sticker.