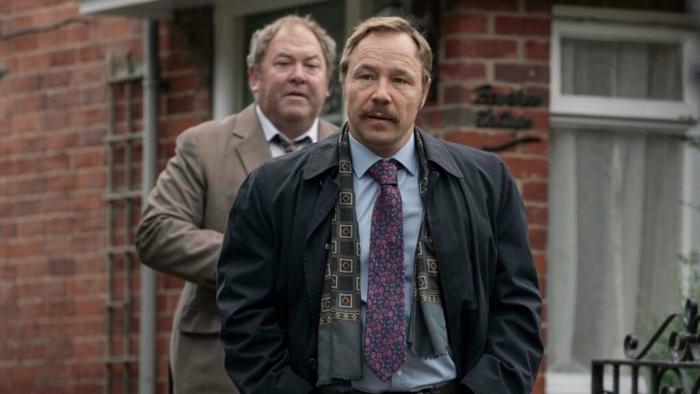 The problem with the true-crime genre — aside from its inherent exploitativeness — is that it is hamstrung by facts, and the facts — or truth — do not always lend themselves well to the genre’s formula. The Murders at White House Farm is just such an instance, where the series — even with only six episodes — seems to outstay its welcome by at least three episodes.

It’s not for lack of a gruesome crime. The Murders at White House Farm is based on the murders of Nevill and June Bamber, their adopted daughter, Sheila Caffell, and Sheila’s six-year-old twin sons, Daniel and Nicholas Caffell. They were all killed on the night of August 6th, 1985, and initially, Shiela Caffell — who had been diagnosed with schizophrenia — was the primary suspect in what was thought to be a murder-suicide. The evidence, however, didn’t add up, and so early on in the series, it becomes obvious that Sheila probably did not kill her family, including her twin sons.

The problem — at least for a television series — is that there is really only one plausible suspect, although, the HBO series makes a few half-assed attempts to raise suspicions in others. By the second episode, however, the identity of the actual murderer is fairly obvious and the mystery element disappears (I won’t reveal the identity of the murderer here, but it’s based on a true story so it is not hard to find out).

In lieu of a decent mystery over the last four episodes, The Murders at White House Farm opts mostly into turning the series into a pissing match between two detectives — DCI Thomas ‘Taff’ Jones (Stephen Graham) and DS Stan Jones (Mark Addy) — who insists that their theory of the case is correct. The slow accumulation of evidence, meanwhile, only reinforces to viewers what is obvious, although the series itself insists on tediously stopping so that the two detectives can measure dicks after each and every break in the case.

Alas, what initially feels like a promising true-crime series quickly collapses, and the rest predictably drifts from one new piece of evidence to the next until the inevitable — and anticlimactic — trial. It’s a good showcase for the acting skills of its cast, and as a bit of British history, it’s OK television, but there is nothing remarkable about it, and — despite being completely adequate — there is little reason to recommend it.

← Review: 'Save Yourselves!' Makes The End Of The World Pretty D*mn Funny | October 2020 Streaming Guide: 25 Movies and TV Shows to Watch This Month →