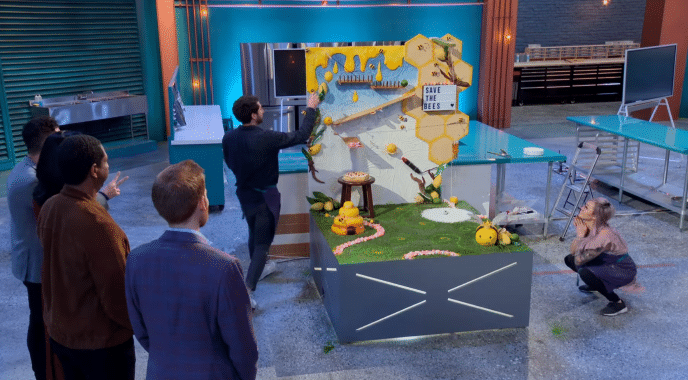 Stream It or Nah: 'Baking Impossible' On Netflix

There are few genres and shows that can be agreed upon for family viewing in my house. Goofball competition shows happen to be the thing we all (me, my husband and The Kid) can agree upon. Also something we all agree on? Justin Willman. We love Magic For Humans. Since there’s very little chance a post-Covid society is going to support Justin’s brand of up-close street magic, I am excited to see he landed a hosting gig on Baking Impossible. It sounds right in our wheelhouse. We love watching shows like Mythbusters, Savage Builds, Nailed It! and Lego Masters. I figure a combination of baking and engineering PLUS Justin Willman would be a slam dunk. 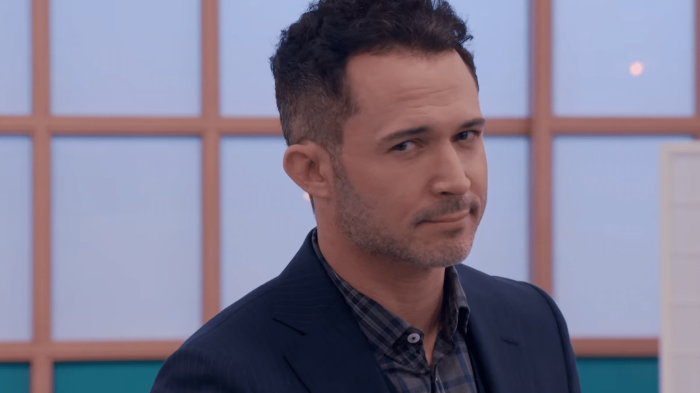 Maybe I’m burned out on all of these competition shows. Maybe this show is trying to do too much. Maybe the portmanteau “bakineering” is too twee to get past. Whatever the case, I knew after the first episode that this isn’t going to be a group watch over dinner any time soon.

Baking Impossible involves two-person teams pairing up bakers and engineers who combine their talents to construct amazing, edible items ranging from boats that float and can be navigated by rudder, wearable clothes, mini-golf courses, and five-foot-tall buildings that can withstand an earthquake table. Oh, and cars that are impact tested. Instead of lists of ingredients and instructions, teams are given a set of specs and the information on what the stress test will be for that challenge. From there, the bakers have free rein on what kind of yummy dessert they want to present to the judges within the guidelines. The challenges they present seem impossible. Credit where credit is due, some truly remarkable things were created over the course of eight episodes. 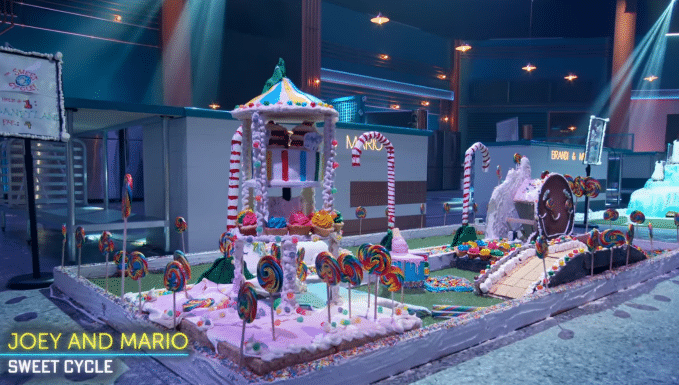 Being a competition show, teams are eliminated if their “bakineered” collaboration fails to pass the stress test for that particular challenge. Throughout each episode, we learn about each of the team members. The thing that works best about the show is the diversity of the competitors. Like Battlebots, Baking Impossible brings together engineers from all over the world and a fair number of them are women. The bakers are a diverse crowd with various levels and areas of expertise. The $100,000 prize goes to the team with the most successful series of builds — whether or not all of them are successful. I’m happy to say that, unlike with this season’s Lego Masters, I am not enraged by the winners. At least it has that going for it.

It’s all too much. The 50-minute episodes drag. A lot of the creations, while fantastical and technically “edible,” are made of stuff you wouldn’t want to eat, like sheets of gelatin, huge amounts of fondant, and modeling chocolate. Sausage casings are used in a few of them. In most cases, the tasty dessert is only a very small part of a larger build. Worst of all, Justin Willman is criminally underutilized. I hope the cast and crew have a chance to experience some of his slight of hand skills between takes because we barely see any of that. 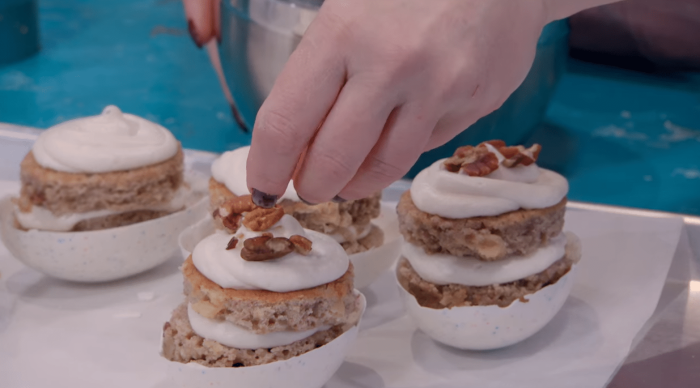 Chef Joanne Chang, whose sticky buns famously beat Bobby Flay on his own show and have won her a James Beard Award, is the baking judge. Dr. Hakeem Oluseyi — astrophysicist, cosmologist, author, actor, New Orleans native, and all around less problematic version of Neil deGrasse Tyson — is the engineering expert. Then we’ve got this guy: 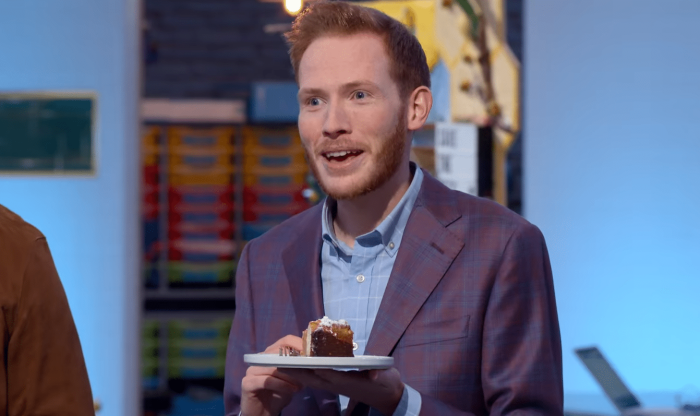 Andrew Smyth was a contestant on The Great British Bake Off a few years ago. He also happens to be an aerospace engineer. He’s the executive producer of Baking Impossible and the brains behind the aforementioned annoyingly twee portmanteau. Bakineering, bakineers. It’s a terrible word, and I hate it. He’s proud of it, though, and we can’t go two minutes without it being said an unnerving number of times. I dubbed him The Most Annoying Weasley. Nothing he does throughout the eight episodes redeem him of that.

One of the other problems is that some of the contestants don’t seem to want to be there. Take, for example, the team of Steve Day and Renee Frohnert. Renee is an aerospace engineer, super enthusiastic and full of joy throughout their time in the competition. Then you’ve got her partner, baker Steve Day. He’s Welsh and … grumpy? Disinterested? This picture really captures the dynamic. I felt sorry for Renee the whole time. She wanted to have fun. Every time something went wrong you could see her face crumble like she had disappointed her dad or something. 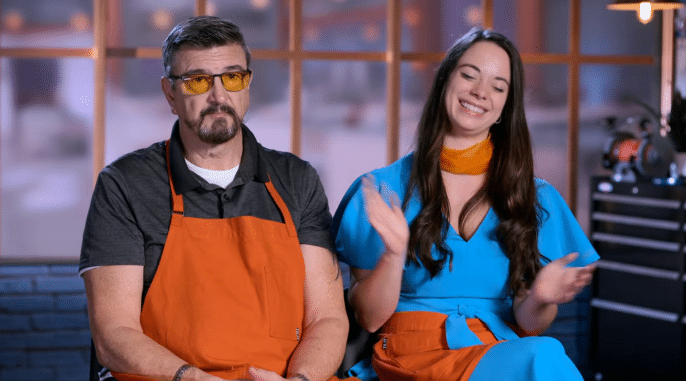 Baking Impossible is a skippable show. It’s not breaking any new ground in baking OR engineering. Most of the challenges are familiar from other maker shows and I don’t feel like there are any standouts, competitor-wise. I will say the partnership between Cindy Ngar and Taylor Tabb is so perfect it wouldn’t surprise me if they ended up being a couple IRL (they aren’t though, I looked it up.) They are adorably whimsical all over the place. They build a pickle-themed car! 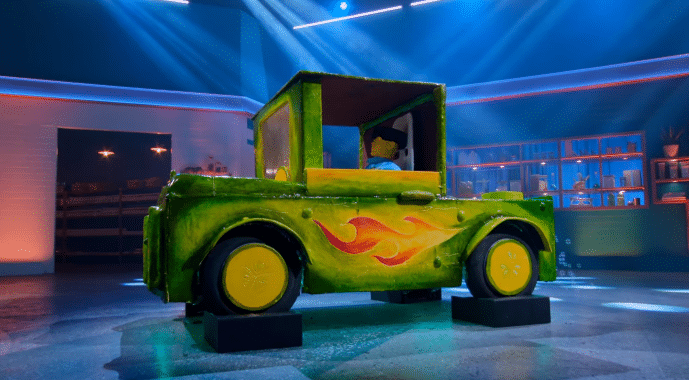 If it gets picked up for a second season, maybe they’ll tighten it up. Or maybe Justin Willman will find a new, better gig and we can all enjoy him there. In the meantime Baking Impossible AND Magic for Humans are both streaming on Netflix. Choose wisely.

← Talent Show Meant to Showcase Extreme Daredevil Acts Results in Extreme Injury | Review: The Extremely Inconsistent Time Travel Rules in 'Needle in a Timestack' Are Only One Irritant of Many →