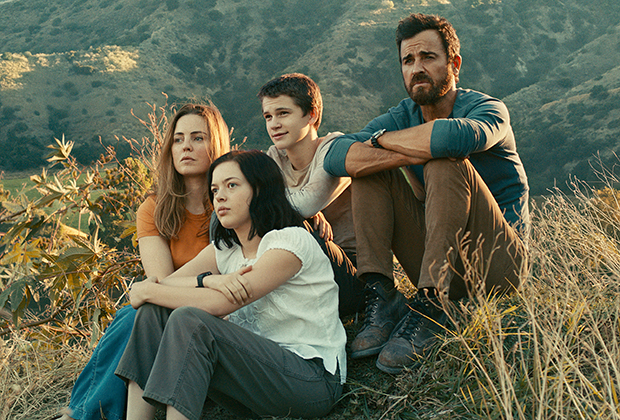 I have not read Paul Theroux’s Mosquito Coast, nor seen the Harrison Ford movie upon which it is based. I have, however, read enough of the Wikipedia entry (and imagined Ford’s crusty approach to the character) to know that the Apple TV+ series does not share that much in common with its predecessors aside from the fact that the main character, Allie Fox — played here by the author’s nephew, Justin Theroux, best known for starring in the second-best series of the last decade, The Leftovers — is equally anti-consumerist and that both play inventors who design newfangled ice machines that go unappreciated by their bosses.

It is my understanding that, in the novel, Allie Fox leaves America to get away from greedy capitalists, and while the television series’ Allie feels similarly, the reason he uproots his family and moves to Mexico is because the feds are after him for reasons that are not yet clear. He and his family have been moving around and changing their identities for years. Now the authorities have caught up with his family, and they are determined to catch Allie — as in, dozens of police cars and a police helicopter are involved, so whatever Allie Fox did, it was serious enough to warrant a massive manhunt.

Allie also has a family. Melissa George, who looked 35 when she was 25 and still looks 35 now that she’s 45 — plays Allie’s wife, Margot. She is committed to Allie and seems unhappily resigned to spending her life on the run. Their daughter, Dina (Logan Polish) is the rebellious type, which works both against the family and the police. Charlie (Gabriel Bateman) is the dutiful son who believes in the best of his father, although it’s unclear if Allie deserves that benefit.

After the first two episodes, it’s hard to say much more about the story because we don’t know that much. Allie did something in the past that got him in trouble with the feds, and now he and his family are on the run, and we honestly don’t know if Allie is in the right or the wrong. That’s it. That’s the show.

But it’s an intriguing one. It’s an action thriller — the first two episodes are basically one continuous action sequence — but it’s engrossing and at times breathtaking. It comes from Neil Cross (Luther), so for a family-driven thriller, it’s surprisingly violent. Less surprising, however, is how intense it is. Allie and his family find themselves in some hairy situations, but Allie is like an anti-Capitalist MacGyver. He can make ice from fire, or use a Coke can to unlock a pair of handcuffs. I understand that Harrison Ford’s character was a raving grump (or a Harrison Ford character), but there’s a certain slickness to Theroux’s version. He’s enthusiastic about starting all over in Mexico, and he remains cool and calm even when the cops are breathing down his neck. But it’s also clear that his actions are putting his family in mortal danger, so he’s not exactly father of the year, either.

I know enough about the movie/novel to know that the first season of Mosquito Coast appears to be something of a prequel to the events of the source material, and for fans of Paul Theroux’s work, that might be more than a little frustrating. Having no fidelity to the novel, however, I can appreciate it for what it is, which is essentially The Fugitive with a family of four, only we don’t know if the lead is guilty or not. That’s part of the mystery, while the fun appears to be in how Allie continues to extricate himself and his family from near-death situations.

It’s unclear how long the season can sustain this level of intensity, but after two episodes, I’m more than willing to stick around to see where it goes, or if it goes anywhere at all.


← Michel C. Hall of 'Dexter' Fame Is In a Band Called Princess Goes to the Butterfly Museum | How the Casting Couch Continues to Thrive in the #MeToo Age →