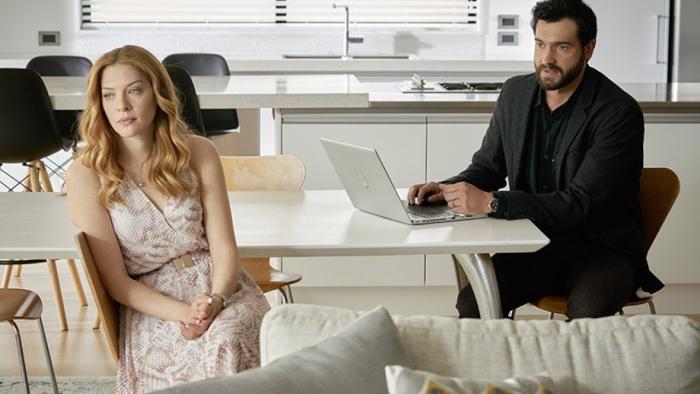 Stream It Or Nah: Acorn TV's 'The Sounds' with Rachelle Lefevre

When it comes to British (or in this case, New Zealand) mystery-thrillers and detective shows, they seem to come in two varieties: The dark and violent series that I like (Luther, The Fall, Broadchurch), and those of the lighter variety, which my wife loves: Father Brown, Midsomer Murder, and Poirot. In terms of tone, Acorn TV’s latest original series, The Sounds, falls somewhere in the middle. It is not violent, but it is twisty (perhaps too twisty) and it always seems to be cloudy where the series is set, the Marlborough Sounds in New Zealand.

The psychological thriller stars Rachelle Lefevre (Twilight, Under the Dome) and Matt Whelan (Narcos) as Maggie and Tom Cabbott, who move to the town of Pelorus to escape Tom’s overbearing family. The two seem to have a blissful marriage, but things take a dark turn when Tom goes missing. Tom’s disappearance, however, unearths about half a dozen folks with a motive to kill him. Tom, however, is not dead. He’s playing dead and hiding out for reasons that will take a while to become clear. There’s a possible drug problem, a potential mistress, issues with Tom’s wealthy family, and locals who aren’t fans of a salmon fishery Tom and Maggie are planning.

There’s a journalist, a family accountant, and a sheriff involved, plus a smattering of small-town locals, although none of them are offbeat or amusing enough to give The Sounds even a trace of levity. It’s a lot of pursed lips, close-ups of stern faces, and very. serious. conversations. It has a very soap opera crossed with a musty mass market paperback quality about it. However, I’ll grant that the landscape is gorgeous, and the acting is competent, although ultimately the thinly drawn characters don’t offer enough to keep viewers invested in the twists and turns along the way.

The Sounds is not a bad show — and it fits comfortably within the confines of Acorn TV’s catalogue — but it would’ve been better served if it had either gone darker and more violent or had lightened up considerably and played up the potential of the quirky, small-town inhabitants. As it is, it’s more of a plodding mystery whose characters are dragged along by the increasingly exhausting narrative turns than it is an engaging thriller.

← 'Color Out Of Space' Review: For Once, Nic Cage Is The Least Weird Thing On Screen | Review: 'A Mermaid In Paris' Plays Like 'Amélie' Meets 'The Lure' →