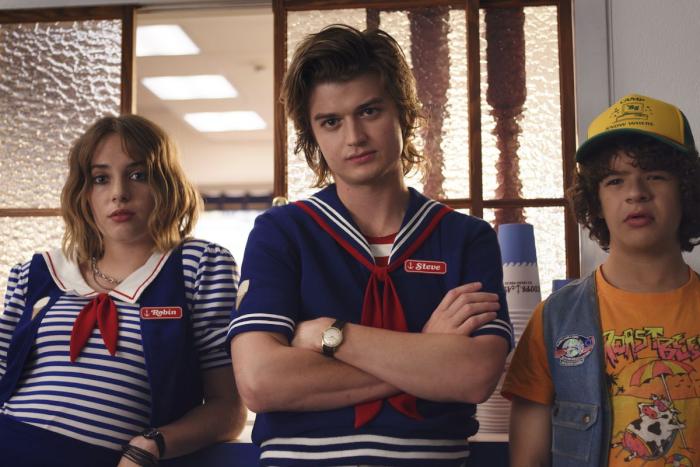 Stranger Things season 4 starts streaming today on Netflix after a three-year hiatus. This season is split in two, with the first seven episodes available on Netflix now. The second half of the season will be available on July 1st and has nine episodes. Some of those episodes have runtimes the same length as Harrison Ford thrillers from the mid-nineties. So, get ready to go back to Hawkins in a big way.

Before we start bingeing the new episodes, I thought I would remind everyone what happened in Season 3 because there’s been a lot on our minds since then!

The Gang battled The Mind Flayer during The Battle at Starcourt Mall. The fight left Billy (Dacre Montgomery) dead and Eleven (Millie Bobby Brown) without her powers.

That shiny, new Starcourt Mall was really a front for a Russian laboratory where they were experimenting with The Upside Down (bad idea, guys!). While the battle raged above their heads, Joyce (Winona Ryder) and Hopper (David Harbour) infiltrated the lab, destroying all of their equipment and shutting down the door they had opened to The Upside Down. While this saved The Gang from The Mind Flayer, Hopper was sadly killed taken into custody by the Russians, and sent to a very bleak-looking Russian black site.

Joyce packed up her kids, Will and Jonathan, along with Eleven, and moved them all to California for a fresh start at the end of the season. This is where we pick up in Season 4.

During all of that, Max (Sadie Sink) and Lucas (Caleb McLaughlin) were kinda sorta becoming A Thing. Are they officially A Thing in Season 4?

Steve (Joe Keery) fell for his fellow ice cream slinger, Robin Buckley (Maya Hawke). She had to let him down though because she’s just not that into guys, dude. Oh well. I hope Steve and his awesome hair won’t make that too awkward when they’re back to fighting monsters together.

When Joyce decided to move the family to California, she crushed the budding romance between Jonathan (Charlie Heaton) and Nancy (Natalia Dyer.) OR DID SHE? Will young love find a way to make it work across all of those miles?

Remember Dustin’s (Gaten Matarazzo) girlfriend? Who loved The Neverending Story? Yeah, me neither. But I swear she was a thing! Maybe Dustin has a new, more local girlfriend this season. Or maybe he stuck it out with his summer camp love.

Season 4 is set six months after the end of season 3. It looks like The Gang is getting back together to fight new monsters and maybe they’ll save Hopper too. Go. Binge! Watch out for The Demogorgon!


← Seth Meyers Takes Well-Deserved Shots At Weak Coward Ted Cruz | The 'Ellen Show' Ended with a Whimper, But What Else Could It Have Done? →