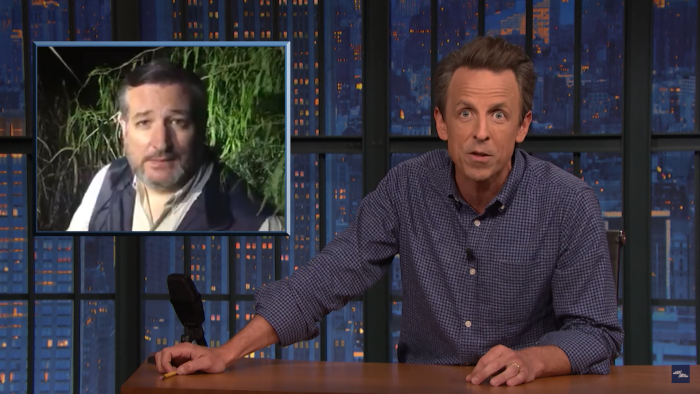 My big toe on my right foot hangs to the right. It’s been a problem most of my life. It doesn’t look good. A few times a year it causes me pain. I’ve tried surgeries, but they did not work. So, because I can’t just hack that foot off, I’m stuck with this ugly, painful, disgusting, gun-loving, canned-soup-eating, spineless appendage. If only there were a human being that reminded me of my embarrassing burden of a foot. Oh, wait!

Ted Cruz is America’s spineless appendage. Several times a year, he goes out of his way to remind us why most human beings despise him. He’s very good at that, too. Whether it’s jet setting to Cancun while his constituents freeze, trying to match wits with Seth Rogen, or just existing, Cruz is always aiming for new lows. This week, following the horrendous shooting in Texas, Cruz sunk even lower. Seth Meyers was there to kick him in the teeth.

Meyers carved some time out of his recent Closer Look to fire shots at Cruz, and he did not miss. How could he with a target that big and slimy? Not only did Meyers mock Cruz’s cowardly escape from a challenging interview, but he also managed to roll it together with a wonderful slam against Cruz’s “solution” to gun violence at schools. If every year we have to be reminded of Cruz’s existence, I’m glad we at least have people like Meyers to treat him the way he deserves to be treated. Like an embarrassment that we can’t just hack off with a bone saw.

← Personal Bravery Is Inversely Proportional to Firepower | 'Stranger Things' Season 3 Recap: Where the Series Left Off Before Season 4 →