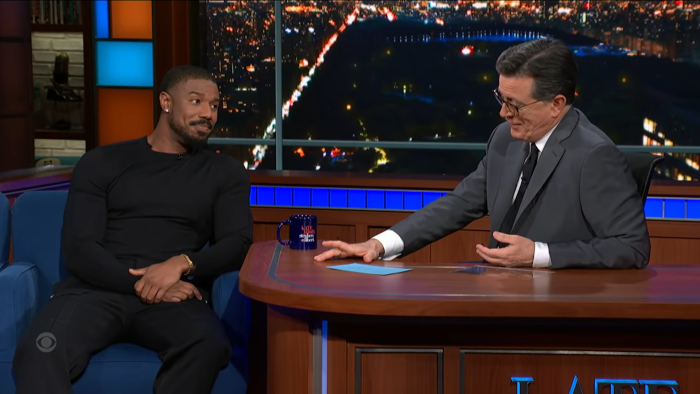 Michael B. Jordan is still the sexiest man alive. Sorry, Paul Rudd. Jordan has the charisma, physique, and acting chops down to a T. He even does his own stunts! Which, in regard to his new movie A Journal For Jordan, involved showing his tuchus on screen. Leave it to director Denzel Washington to know exactly what the people want!

Jordan stopped by The Late Show with Stephen Colbert to talk about his new movie, and Colbert couldn’t help but ask about Jordan’s experience. What’s it like working for Denzel? How did you prepare to play a military officer? When did you whip those hams out? Michael plays the moment great as well. He’s just cool about it in a way that significantly ups his sexiness quotient.

They also talk about Jordan’s love life. He’s been dating Lori Harvey, daughter of Steve Harvey, for a year now. It’s not some off-again on-again Hollywood romance either. Jordan says he’s in love! For the first time in his life! Frankly, that love emanates from him when he talks about Lori. It’s sweet to watch.

Michael B. Jordan is a star and watching an interview with him is a treat. This one feels extra special though. Not just because of the buns talk either! Though that is very much a part of it.


← Let's Talk About THAT Spoiler in the 'Sex and the City' Sequel, 'And Just Like That' | Is Jason Reitman's 'Saving Simon' the Best Television Ad of 2021? →