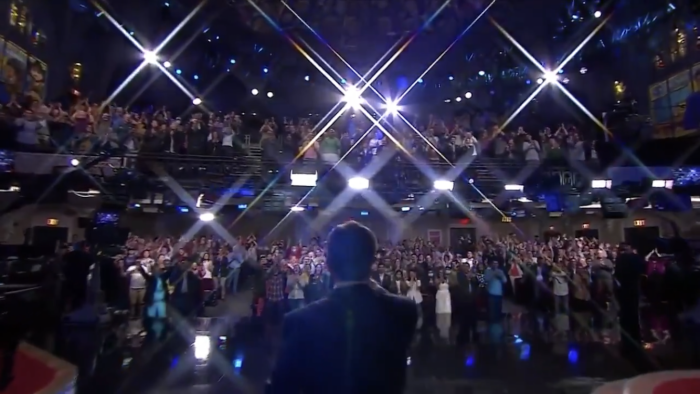 What a night! The air is filled with electricity from coast to coast. First, Conan O’Brien welcomed live audiences back into the Largo theater in LA. Shortly after that, Stephen Colbert welcomed audiences back into the Ed Sullivan theater in NYC. The legendary theater was absolutely abuzz from all the love and excitement! A live band! Special guests! Colbert singing to a pair of pants! New York is back.

Here is the general vibe of the night summed up in one picture:

It feels good to be back. pic.twitter.com/jeHGFrX6Y6

Colbert kicked things off with a bang. Standing in front of the raucous crowd, he danced with bipedal doses of the vaccine at the end of a killer monologue. Colbert has not shied away from delivering his standard monologue over the last year but, for obvious reasons, this go-round felt different. No longer was he performing just for his wife (who he named his greatest audience ever before bringing her out). Here was a man happy to hold court once more, only improved by the presence of others.

Evie Colbert is passing the torch on to the crowd now that she won’t be the only member of the audience. 😂 #LSSC pic.twitter.com/MdFVmMvKaH

Next we had, in my opinion, the best impersonation of Joe Biden currently in the game. Dana Carvey nails the current president so perfectly and effortlessly it’s almost unfair. He has done the voice in interviews, but seeing him in full makeup and costume was something special. The “Master of Disguise” (nailed it) has proven time and again why he is such a magnificent mimic and I’m happy to report that that is still very much the case. Colbert could hardly keep a straight face.

President Biden (@danacarvey) wants you to know you can trust him because of his hands. 😂 #LSSC pic.twitter.com/G52WTn3pWY

Next, Colbert brought out his old friend Jon Stewart. Their talk was an equal mix of love and comedy. It gave the vibe of being in the room with two friends as they reconnected and made each other laugh.

.@jonstewart has a secret. #LSSC pic.twitter.com/xGmUq3uUvi

Finally, a performance by the incomparable (and Academy Award Winning) John Batiste and let me tell you that the man brought the house down. Even Colbert got in on the action! Like Stewart on the couch, Batiste on the stage for the first show back in the Ed Sullivan Theatre was an inspired choice. The incredibly talented singer/dancer/composer/snazzy dresser has set the bar pretty damn high for anyone that follows him.

We’re thrilled to have @JonBatiste back in the theater and performing his single “FREEDOM” #LSSC pic.twitter.com/hQpC13Dfcy

The first night back with a live audience at The Late Show with Stephen Colbert felt like a party.