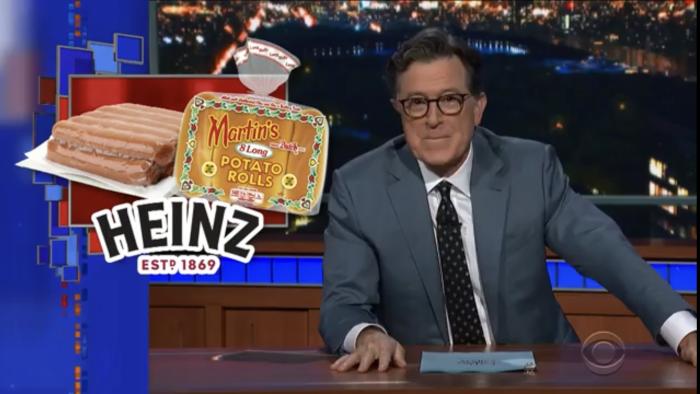 You’re preparing a BBQ; you’ve bought the hot dogs, you’ve bought the buns, but there’s a problem. Thanks to Big Hot Dog, you’ve now got more hot dogs than buns. You start wondering, “Maybe if I buy another pack of buns, I can use the extra ones in a couple days?” Nonsense! You’re never going to do that! Then you think, “Maybe Grandma will eat her hot dog without a bun?” What is the matter with you?! You’re making morally questionable decisions because Big Hot Dog decided to ensure that you’ll always be stuck with more dogs than buns. Chaos ensues.

Unless Stephen Colbert has anything to say about it! And he does!

Last night on The Late Show With Stephen Colbert, the late-night host lamented the ten hot dogs to eight hot dog bun ratio. As he should. This lamentation was kicked off because Heinz themselves have petitioned to fix the broken ratio. I know! You can’t even contain your excitement. This is the best news you’ve heard all week! It’s made that much better coming from behind the desk of Stephen Colbert.

There are so many jokes packed into this incredible announcement that you will be needing to catch your breath. First, you marvel at Colbert’s genuine excitement. You feel absolutely charmed by Jon Batiste’s impeccable ensemble. Then you think, “Given my hot dog problem, this is a segment that really speaks to me.” Then WHAM! You get absolutely tickled by several hilarious Kevin James jokes. Your day is made!

You’ve been waiting for this bit and I do not blame you. It’s been a long time since your grandmother choked on that hot dog due to the lack of bun support. Your family hasn’t spoken to you since. But there is hope on the horizon, thanks to Stephen Colbert… and Heinz.