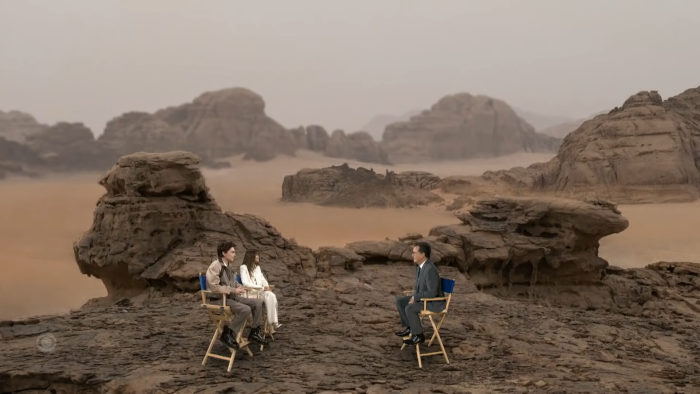 Dune* is upon us! Whether you’re seeing it on the big screen or an iPod mini as the director intended, the Denis Villeneuve epic is sure to dominate internet discourse this weekend. With the movie premiering, the cast is making the rounds to promote it. With a movie this big, you can’t do business as usual. So, The Late Show with Stephen Colbert sent the eponymous host to the planet Dune itself!

Colbert was joined by Zendaya & Timothée Chalamet on the sandy, dune-covered planet Dune. A little treat for all the people out there who have spent decades reading the books. Colbert is no stranger to the series himself. He knows all about the planet Dune and its mass supply of cumin that, in this reality, give people the power to breathe “sand air.” Pretty wacky stuff! But then again, that’s the sixties for you.

Timothée Chalamet, it turns out, was a massive fan of the celebration of cumin and large sand caterpillars that are contained within the pages of Frank Herbert’s novel. Zendaya was not as familiar but did admit that it was her grandfather’s favorite book, leading to a hilarious exchange with Colbert. There wasn’t as much talk about the cumin as I was expecting (it seems important!) but maybe they’re not the big fans that they claim to be.

I’ve said this before, but it’s hard to feel down to Earth when doing your ten-thousandth interview in two days. It’s even harder on the dusty, hot, unforgiving planet Dune. However, Zendaya & Chalamet do just that. I watched this entire segment happily, hoping that one of the infamous Dune Air Ships may float by at some point. Alas, that did not happen, but it was an enjoyable interview nonetheless.

Soon the whole world will be as obsessed with Dune as I am. Then I won’t feel weird about wearing my “I’m Cumin For You, Dune” shirt out in public. Everyone will be in on the joke! Will all be part of House I’ll Trade These! Dune!

*I have never read the book Dune, nor have I seen the 1984 film by David Lynch.

← Halyna Hutchins, Cinematographer For Alec Baldwin's New Film, Shot And Killed On Set By Prop Gun | It's Weird That They Rebooted 'Head Of the Class,' Isn't It? →