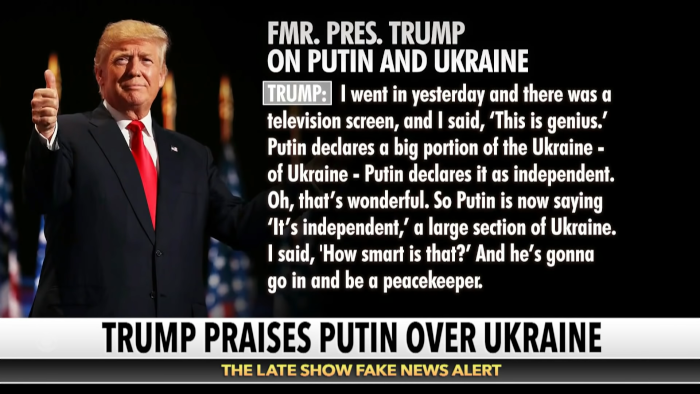 Vladimir Putin has ordered Russia to attack Ukraine. It is a terrifying, uncertain time to be alive. The only thing that does seem certain is that Putin is in the wrong here. Well, that depends on who you ask. If you checked with our embarrassment of an ex-president, you’d be siding with Putin. This isn’t a shocking turn of events. It is, however, a perfect opportunity for Stephen Colbert and his crew to take a few shots at the man who has been kissing Putin’s ass for years.

Trump called Putin a “genius.” If he’s willing to say that about a freedom-hating dictator, who else is he verbally fellating? The Colbert Crew has a few ideas. I won’t spoil the identity of the others. I will say that despite the video being a joke, some of the scenarios felt pretty damn real. There is no low too deep for Trump to sink at this point.

While the bit about this national embarrassment of a man is a joke (and a damn good one), it’s hard to get past how infuriating his actions are. He and his supporters would rather support a violent, hateful enemy than their own country that they claim to love. Why? Aside from a possible Buttload of Blackmail (TM)? Sour grapes. They lost, they know they lost, so they’re selling out their own homeland to make themselves feel better. It’s pathetic.

So, as the globe stares down the possibility of World War III, take comfort in the fact that Trump will always be the butt of the joke. There is no going back from this. It’s not like he was already in everyone’s good graces. Plus, history has a way of remembering the mistakes people like him make. Especially now. Can you imagine if YouTube existed during the Civil War?? Wait … don’t … don’t imagine that.