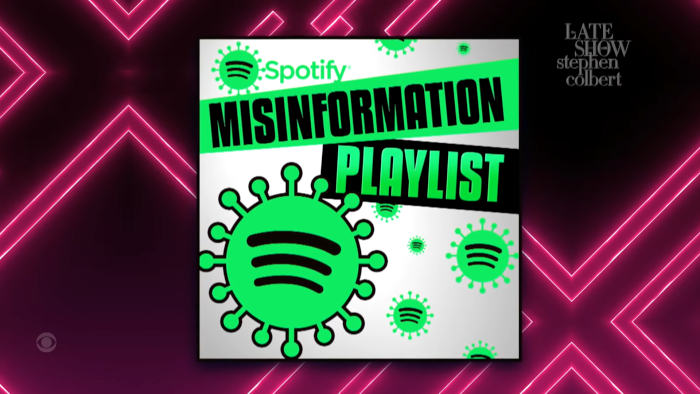 Spotify used to be something I pretended to have so people didn’t know I bought music on iTunes. It’s still that, but now it’s also at the forefront of COVID misinformation news. The music streamer recently came under fire thanks to the antics of one Joe Rogan. The former Fear Factor host used his massively successful podcast to spread misinformation about COVID in the form of “having a conversation.” People got mad, he “apologized,” and, well, people are still pretty mad. Now, Stephen Colbert is taking some well-deserved shots at the app I totally have.

In the newest episode of The Late Show with Stephen Colbert, the Crew kicked things off with a fake commercial for Spotify. That commercial ends up being for playlists curated to spread vaccine misinformation. Not only are the song choices funny but it feels like something someone would attempt to do. Someone so deep into these theories and conspiracies that they think, “I must communicate to the masses through my sick tracks!” It doesn’t feel that far off.

It also cracks me up that Spotify’s legacy could crumble into something like this. To my recollection, Spotify didn’t start in people’s good graces either. The app underpaid musicians for their music while making a bundle off of it. It didn’t stop people from using it, but now it may lose listeners all the same. In the future, when Joe Rogan completes his ascension into awfulness and runs for political office, he’ll cite the app as the “last true place of free expression” or some such nonsense. 2028 is going to be great.