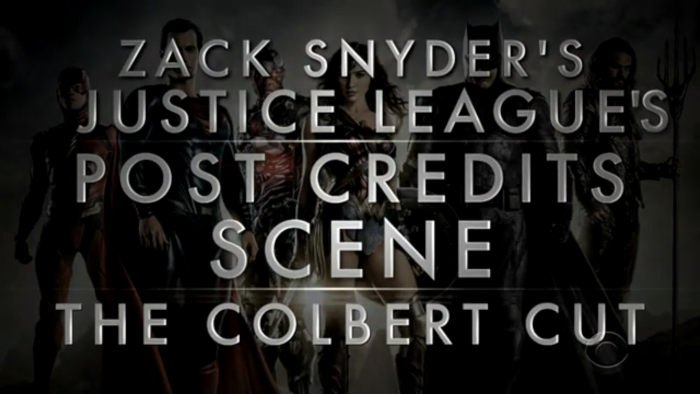 Stephen Colbert Released His Own Hilarious Cut Of ‘Justice League’

It’s been a weird year for late-night talk shows (and, ya know, a devastating year for most of the world). Due to the pandemic, we’ve seen shows from hosts’ homes. Interviews have been conducted almost exclusively on Zoom. Taped segments have been few and far between. However, as things start to creep back to normal, so does late night. A great example was Stephen Colbert’s recent Snyder Cut spoof.

Chances are you know about the Snyder Cut of Justice League, so I won’t spend the time explaining it. Especially since I don’t want to turn into just what this sketch is making fun of. Colbert, upset that a certain scene featuring Jesse Eisenberg’s Lex Luthor was not expanded upon in the four-hour cut, decided to do it himself. That’s right! Get ready for Stephen Colbert in a bald cap!!

There’s a lot of funny in this sketch. It starts as a simple, silly parody and then evolves into many people’s worst nightmare: a long, drawn-out explanation of comic book history by a friend. I say this as someone who has, whether people like it or not, held court at parties by explaining how FOX’s X-Men films are a crazy anomaly the likes of which we may never see again. In fact, while I’m on that subject, when it comes to onscreen interpretations, the films not only influenced other films but the comics themselves and — Wait! Where are you going?!?

Not only was I psyched to see a fun late-night parody of a movie I very much enjoyed, I was thrilled to see a taped segment. It really feels like things are going back to normal. I applaud all of the hosts for what they’ve been able to achieve this past year, but I am much more excited to see them get to work at their full strength. Especially if it gets us skits like this.


← 60 Seconds of Joy: Kelly Clarkson Losing It After Gwyneth Paltrow Cites WAP | Krispy Kreme Is Giving Away Donuts for Vaccinated People! What Could Go Wrong? →