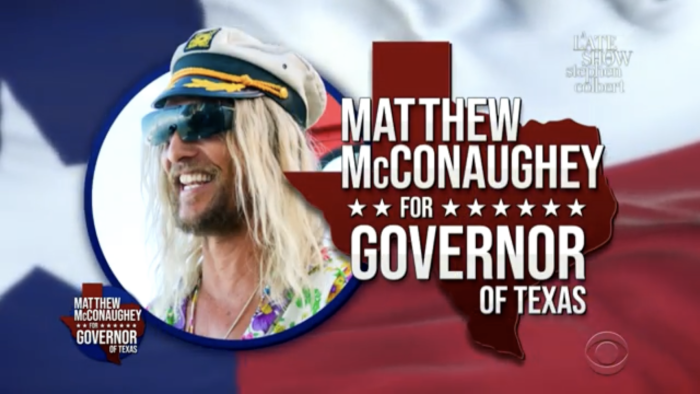 Just like Batman bursting onto the scene in Gotham City, having an unqualified con artist elected president of the United States changed things. There’s no going back. We will only see more political novices throw their hats in the ring and gain public support. Like The Rock’s very public flirtation with the country’s highest office and, now, Matthew McConaughey exploring a run for Governor of Texas.

It’s easy to dismiss the actor’s possible campaign. On A Late Show With Stephen Colbert, they decided to present it using McConaughey’s own words. Kind of. In a bit that came a little too close to reality for my nerves, the Colbert crew assembled a selection of clips as a fake campaign ad. I say fake, but at the end of the day, the star of Failure To Launch will more than likely use his celebrity to this degree, albeit not as blatantly.

That’s the country we are now. There’s less “Why” and more “Why not?” Who knows, McConaughey could be good for Texas. He wouldn’t be the first actor to hold such an office. My biggest concern is that elections like this could eventually lead to another Donald Trump but, ya know, worse.

I’ll be interested to see how this news gets covered if McConaughey does announce a bid for office. It’s all fun and games until someone’s sworn in on a copy of The Lincoln Lawyer!

← Tig Notaro Is Taking Being 'Sexy A.F.' In Stride | Mike Lindell, The MyPillow Guy, Is Having a Hell of a Week →