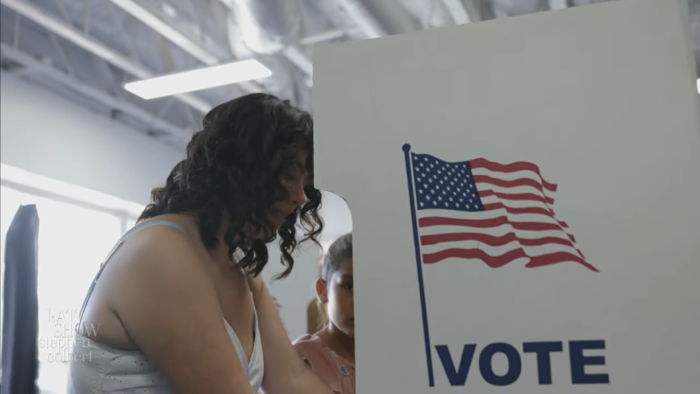 Democracy is hanging on by a thread! If certain people had their way, it would have been gone already. Luckily, this time, we persevered. But what happens the next time a bunch of bumbling buffoons attempts to besmirch our beloved ballots? We just treat them like the idiots they are and catch them on camera committing crimes in all their crooked glory!

Recently, footage emerged that shows a fake elector for TFG leading operatives into an elections office in Georgia. That same day, an election system in that office was breached. Coincidence? Of course not. Just another example of stupid people trying to commit fraud out in the open. This likely won’t be the last time we see such brazen actions. So how do we stop them going forward? According to the Colbert Crew, we just keep filming.

The most recent episode of The Late Show with Stephen Colbert kicked off with an ad for Election Interfere-Ring Video Doorbell. It’s a camera made specifically to catch election meddlers in the act. If the people working for TFG are going to leave this much of a trace, we may as well embrace it!

The hard part is not becoming disillusioned. Yes, TFG’s people are idiots and tried to do something bad. Will they be punished for their actions? Who knows. You’d think catching people on camera would be enough, but we wouldn’t want to cause a political divide or some other such bulls*** excuse.

← Vanity Fair Gets Olivia Wilde's Side of the Story in a Friendly Celebrity Puff Piece | 'The Boys' and Eric Kripke to Toxic Fans: We Don't Want You →