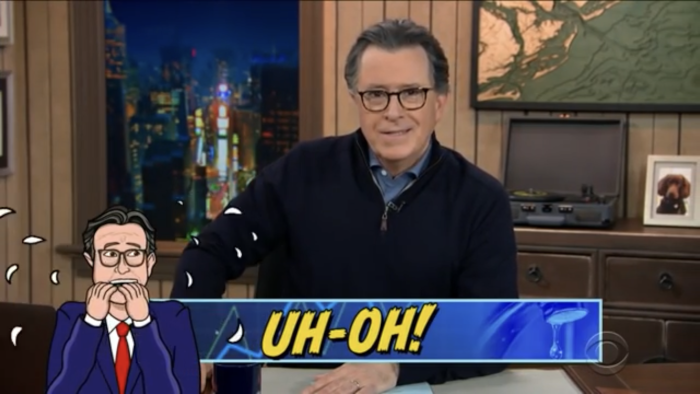 I am PARCHED. Before we dive into this segment from The Late Show with Stephen Colbert, I’m going to take a sip of clean, delicious, easily sourced … oh … oh no… Water is scarce now, y’all!! Is it just me, or did hearing this from Stephen Colbert make anyone else extra nervous??

I’ll admit, I saw this news a few months ago and didn’t think much of it. “Surely this is people getting all worked up for nothing,” I thought. Cut to today, I’m looking for a late-night clip to talk about and I land on Stephen Colbert’s calm, reassuring face as he looked directly into my soul and made it clear that I … probably should be worried.

Water is becoming a tradable commodity. Which means it will soon go the way of oil and gold. So, unless you’re Jed Clampett or Francisco Scaramanga (nailed it), this, ya know, should probably concern you? It took hearing it from a talk show host to concern me. Which is… troubling.

My lackadaisical attitude falls on me (obviously). Not only have I not taken this seriously, I’ve made jokes about it. The headline to this article is a joke! Heck, look what I said on Twitter a few weeks ago.

Reason #785 I’m excited to have twins: Two soldiers to defend my reservoir in the Water Wars of 2047#twindad

Apparently, joking is how I’m going to deal with this. Even in the face of impending doom and dehydration, I STILL made the SAME joke. All I did to show that I was taking it more seriously was move the year up a decade. Maybe it’s a defense mechanism? Either way, I think I have a problem.

Or, we all do, because of the eventual capitalist control of water. Good thing I didn’t do a spit take while watching this video … though, that would have been pretty hilarious.