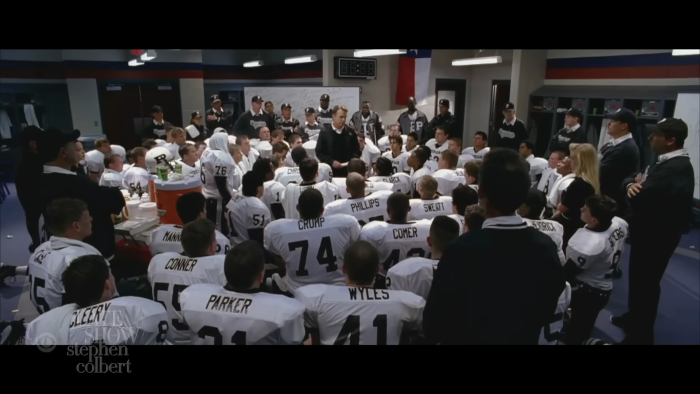 Stephen Colbert Flips The SCOTUS Football Decision On Its Head

The Supreme Court of the United States was on a bit of a roll this last week. By roll, I mean they went out of their way to push our country closer to a Christian theocracy that hates women. Closer than we already were, anyway. One of their decisions involved a football coach at a public school who was fired for leading his team in prayer after games. SCOTUS decided that a government employee pushing religion on impressionable high school students was A-OK! The folks at The Late Show With Stephen Colbert think that should be taken a step further.

With the assistance of the 2004 Billy Bob Thorton film Friday Night Lights, the Colbert Crew show how this Supreme Court decision could bite its supporters in the ass. Instead of leading a Christian prayer, Thornton’s character (voiced by the impeccable Brian Stack) pitches a more psychedelic church to his students. Forget about Christ, let’s try some Ayahuasca!

To be fair, if you’ve been on the internet these last few days, you’ve likely seen some version of this joke. People were quick to point out that non-Christian religions likely wouldn’t receive the same warm welcome. What’s great about this bit is that it takes things even further. If hallucinogens seem too extreme, what about wine? What’s to stop an employee from offering the sacrament to an underage child and then citing religious freedom as an excuse?

The doors are wide open for extreme interpretations of this decision. People will make jokes for now, but things will come to a head. The tolerance of the Christian Right will be tested, and I have a hunch that it’s not that strong.

← Biden Supports Abolishing the Filibuster to Codify Roe; Is That Even Possible This November? | The 'Quantum Leap' Reboot Will Seeks to Right the Wrongs of the Original →