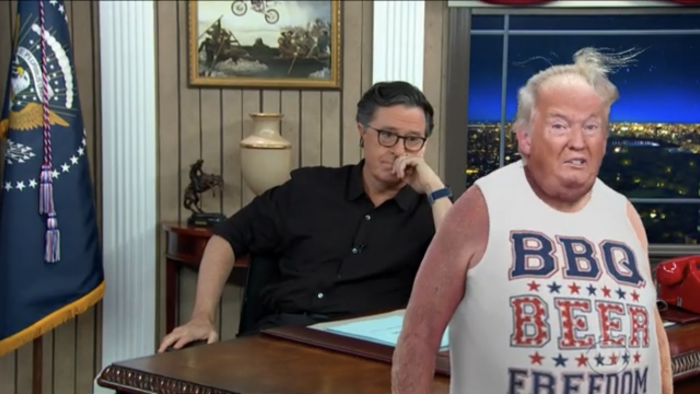 “We’re taping this just a little while after Donald Trump walked into the White House briefing room, actually, and tried to poison American democracy.” That’s how Stephen Colbert set the tone for the top of his show. For those blissfully unaware, Donald Trump went on television yesterday to make baseless lies about the election process. Stephen Colbert took that personally and started his show with an impassioned call to Republicans and, well, decency.

If you’ve read any of my late-night coverage on this site (especially this week) you’ll know I’m an emotional person. I admit that freely. But dammit Colbert’s monologue last night was different. You can feel the empathy emanating from the man. The passion. He loves people and he loves this country and he doesn’t want to see what makes it great get destroyed.

“You need to choose: Donald Trump or the American people.” That’s the call that Colbert gave to Republicans who have remained silent, and he’s not wrong. This is the time that will go down in history. We are on the precipice of change that could determine who we are as a nation.

Over 73,000,000 people have voted for Biden (as of this writing) and it really did feel like Colbert was speaking for all of them. Meanwhile, the person speaking for the 68,000,000 people (ugh) who voted for Trump was wearing a “BBQ BEER FREEDOM” shirt and screaming about cover-ups. That really sums it up. Colbert is acting like an adult. That’s what we want. That’s what we’re gonna get.

← Flip Flip Flipadelphia: The Gang (and Gritty) Reacts To Philadelphia Flipping PA For Biden | Johnny Depp Is Out Of the Fantastic Beasts Franchise →