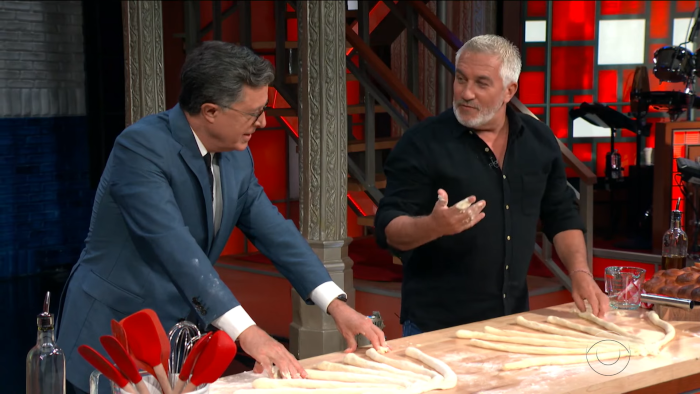 Everyone is eagerly awaiting the next series of The Great British Baking Show. The show is equal parts comforting, devastating, nerve-wracking, and delightful. It’s got everything. As is the case with most popular shows, the wait for new releases can feel like an eternity. Luckily, Stephen Colbert decided to bring a taste of Bake Off to late night by baking bread with baker, chef, and GBBS judge himself Paul Hollywood!

Seeing Hollywood on the other side of the table made this segment exciting from the jump. It’s always fun to see someone have to do what they usually judge others for doing. I also love people doing things they excel at and have put hours into. Hollywood is so dialed in to what he’s doing at one point that he can’t stop twisting bread dough. But it’s Colbert’s playfulness that makes the segment sing.

It’s not just that Stephen Colbert is cracking jokes during this whole bit. That’s his job! What makes things even funnier is that he seems to go out of his way to not take the bread-making seriously. He’s actively not following instructions, much to Hollywood’s delight and dismay. Watching someone like Hollywood, who is used to people hanging on his every word, have someone not listen to him in the slightest is fantastic.

We’re likely several months away from new episodes of The Great British Baking Show. Until then, Stephen Colbert has you covered like too much flour on dough!

← WB Claims that #ReleasetheSnyderCut Was Amplified by Bot Armies Under Zack Snyder's Control | Look: Quinta Brunson Gets In On the Weird Al Yancovik Biopic Fun As Oprah Winfrey →