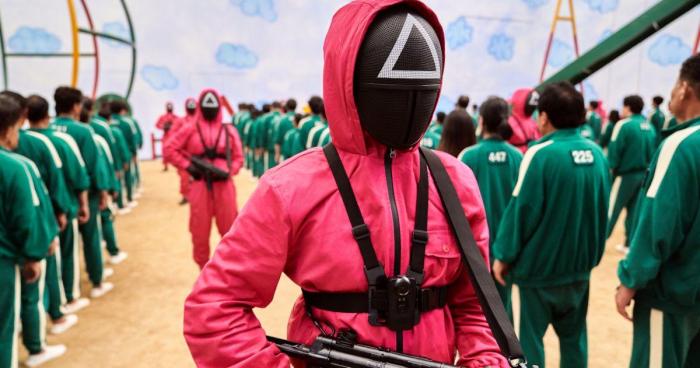 'Squid Game,' But Only the Dumb Bits

This is the highly subjective account of someone who watches series while riding a stationary bike towards a mythical land of lower blood sugar. I hate it, so I need something to distract me until the indignity is over. Squid Game became that, for all the wrong reasons - I was so angry with the storytelling that I grimly plowed through it, one episode a day, propelled by anger and exasperation.
The following is an account of my experience. There are good things about the show. This is not a list of them.

We are introduced to a guy and shown that he’s an asshole. As I understand it, Asshole Guy is the protagonist. Based on the promos, he’s going to be playing some sort of game. He gets his daughter a birthday gift from a vending machine and doesn’t even check inside the box to see what it is. This is some intricate character-building. Ten minutes in, I already hope that he dies first. In fact, I hope he dies before he even gets to the game, someone yells “Ha ha, he died” from a passing car, and the credits roll.

Smart Guy is smart, like white-collar smart.
Brain Tumor Guy has a brain tumor. Got it.
Everyone else’s motivation is that they’re in debt. Got it.
Not great, not horrible.
Episode 2 - Hell
Everyone wants out of the squid game. Smart Guy reminds them that if they want out, they can just vote. After giving them an out, Smart Guy votes to stay in the game. Maybe later we’ll find out why he gave them an out then? (We won’t.)

Brain Tumor Guy is the deciding vote, because of course there’s a deciding vote. We get a voiceover about him having a brain tumor, even though that’s literally his only defining feature. He votes to leave. Why? Oh, silly rabbit …
Asshole Guy returns home. The door is open. His mother is not there. He walks around the apartment and says to himself, “Where’d you go? You left the door open and everything.” Which… whoa, that’s right — the door WAS open! And his mother WASN’T there! I totally missed that. Thanks, completely natural need to talk to yourself.
What oxygen-deprived focus group did they interpretative dance this at to think they need to repeat everything ad nauseam?
Apparently, Asshole Guy is still in debt. It’s so much debt that his mother’s feet are falling off - which is a lot. Enough to go back to the squid game, perhaps? Let’s spend the next what-feels-like-three-hours finding out.

Smart Guy is also shockingly still in debt. He’s white collar, so it’s fully-suited-in-a-bathtub time. Decadenza! The doorbell rings. Smart Guy spends 30 seconds (I timed it) walking to the door. Just walking. Then it’s another 40 seconds of him getting a calling card. It’s almost as if there’s actually going to be a game in this series called Squid Game. I am shocked, I am thrilled, I am what? Titillated.

Some dude set up Mobster Guy and is laughing about it to his face. Then slowly gets out of the car. Who gloats at a guy who had SNAKES DRAWN ON HIS FACE WITH NEEDLES and then presents their hindquarters for stabbing? Surprisingly, not someone with a brain tumor (as far as we know).
Asshole Guy is offered the money he needed to get his mom into hospital and save her feet, but screw that, he won’t abandon his kid (the one he couldn’t be arsed about). And look, I get it. Mom looked super old, and feet are the devil’s doorstops. Slap some wheels on her and take her to a skatepark instead.
But wheels cost money. So I guess we’re going to be playing the Squid Game after all.

Episode 3 - The Man with the Umbrella
We’re getting some more characterization now. Smart Guy is smart. We’re told that a bunch of times. I wonder if that’s going to be a plot point.
Strong Guy is Strong, and an immigrant.
Brain Tumor Guy is old. Also: brain tumor.
Mobster Guy is super evil.
Pickpocket Woman is wily, and the only character who doesn’t give me a migraine.
Needy Woman is brash and co-dependent.
Police Guy is taking notes: island, masks, abductions. I guess he’s going to be recapping stuff for us in case the voiceovers and the repetition aren’t enough.

Episode 4, Stick to the Team
People have started to turn on each other. Asshole Guy makes a huge show of asking for justice for a murdered extra, and is incredulous that the faceless goons who JUST MOWED DOWN A HUNDRED PEOPLE don’t react to a murder. The twists keep on coming.

Everyone introduces themselves. It’s very sweet. But then they ask Brain Tumor Guy what his name is, and he goes - I transcribed this subtitle by subtitle:
What?
My name?
Oh.
It…

It…
They call me…

All it would take for this to become an Angie Tribeca/Children’s Hospital-esque parody is a commercial break in the middle. Seriously. No additional edits required. And on a human level — who lets an elderly person struggle for such a comically long time before intervening?! These people are assholes.

In order to get into Mobster Guy’s good graces, Doctor Guy announces that he’s a doctor, and starts sewing up his wound. Because while everyone was stripped of their possessions, to the point where Needy Woman had to smuggle cigarettes in her vagina, when you roll a doctor in Squid Game, basic medical supplies just appear in your inventory.

Police Guy takes more notes: shapes, rank, masked leader, gun massacre, riot, abetting murder, my brother. He writes down MY BROTHER. To remember that he went there to find his brother. Again, this is Police Guy, not Brain Tumor Guy.

They have to split up into teams, which becomes an exercise in misogyny, and goes unquestioned by any of the characters. So, naturally, the show is now going to subvert expectations and show us that women have a lot to offer? Nope. Today’s lesson is: women are useless (but some are also annoying).

Episode 6 - Gganbu
I actually kind of liked this one. And then the first major character to die was the dark-skinned immigrant, which seemed… familiar. I felt the cultural divide receding. I guess we do have something in common. Yay, let’s bond, except not, because xenophobia!

Ep 7 - VIPs
Needy Woman is openly taunting Mobster Guy, because it’s not like they’ve had an entire episode of contestants killing each other with impunity.
The VIPs arrive, and if I had any doubts about maybe the dialogue being better in Korean and getting mangled in translation, this is where they came to die. A model bridge is revealed. The dialogue: “What’s that thing?” “Looks like… a bridge of some sort.” “I like the looks of it.” Then the actual bridge is shown and we get: “Oh wow! It’s bigger!” “Yeah… a lot bigger!” It’s not woodchips, but it’s… not not woodchips.

There’s also this lasagna of exposition with players first being asked to choose numbered vests, then delivering their rationale to the mannequins wearing the vests, then the VIPs commenting on which vests they are likely to pick, and then Asshole Guy going over the whole thing again and listing all the options in painstaking detail in voiceover, while staring right into the camera in supplication to Constipatia, lesser goddess of gastric distress.
And then, right on schedule, the gross VIP turns out to be gay. Misogyny, racism, homophobia… oh my, can’t wait to see what’s behind door number 4! Not only is he gay, he’s doing full-on rapey Vladimir Harkonnen realness. And goes off to boink a random masked attendant in the middle of a game he specially flew in for, seeing as, and I quote, “there’s nothing like seeing it in person. But what can I say, those Korean boys… amirite? *winky anus*

The last contestants make it across the bridge, time runs out and BOOM - the bridge explodes! in slow motion! So cool! As the camera pans back, we see slow motion Pickpocket Woman. And then slow motion Asshole Guy. Then slow motion Smart Guy. It’s been a full minute of slow motion now. Then we get a slow motion VIP saying “It’s likeee a briiiiidgeeee. Onlyyyy biiiggeeeeer. Aaand iiiiit explooooodeeeed…” That last one might have been a rage stroke.

Ep 8 - Front Man
I was shocked to see there was hardly any redundancies in this one, and then saw that the episode was half the usual length, so maybe that’s why.

Ep 9 - One Lucky Day
We’re here, at the finale. The VIPs continue to provide stilted, pointless exposition. Asshole Guy and Smart Guy fight. It takes forever. Then Smart Guy, who has murdered numerous people, kills himself so that Asshole Guy can come out of this thing with his hands clean (as even Brain Tumor Guy was apparently ecstatic that he got “home” before he got offed). Asshole Guy wins.

He goes back to the city and bumps into Smart Guy’s mother. Apparently his own mom - she of the detachable feet - got even more sick and hasn’t been picking up the phone for the past few days. As Asshole Guy gets home, the lights are off, and his mother is lying on the floor, motionless. I know I should be sad, but all I can think of is that I yearn for a VIP to show up with a throwaway line, or for a voiceover to clarify that the mother is, indeed, dead. I can’t feel anything anymore, unless it’s the pain of bad storytelling. I wonder if that’s what sounding is about.

It’s been a year, and Asshole Guy hasn’t used any his winnings. Pickpocket Woman’s family has been stuck in North Korea for a year. Smart Guy’s mother has been working that stand for a year. Because Asshole Guy was moping. This is the protagonist of this show. I can’t.

He gets summoned to wherever. The big reveal - the man behind it was Brain Tumor Guy! Didn’t see that coming, don’t care, it changes literally nothing.
Also, if I get summoned somewhere out of the blue, and instead of getting right down to it, the guy launches into a long-winded parable instead, I’m walking right back out that door. Text me the bulletpoints next time.

The show almost finds a way to combine exposition with slow motion — Brain Tumor Guy delivers his final speech laboriously in two-word bursts. I’m almost impressed by their single-minded dedication to wasting my time. No wait, that’s anger. I’m still angry.
At one point Asshole Guy starts choking Brain Tumor Guy, who says that if he kills him now, he won’t get to hear his explanation for the whole thing. I actually started laughing here, as I am 100% certain that this “explanation” will provide absolutely ZERO new information. Every single boring detail has been yelled at me over and over again, whether I needed reminding or not, so I’m going to go out on a limb here and say ‘rich people get their kicks by toying with poor people’ is the full breadth of this stirring philosophical rumination.


← Airports: Do You Arrive At Least Two Hours Early Or Are You Wrong? | 'Impeachment: American Crime Story' Takes on Operation Prom Night →