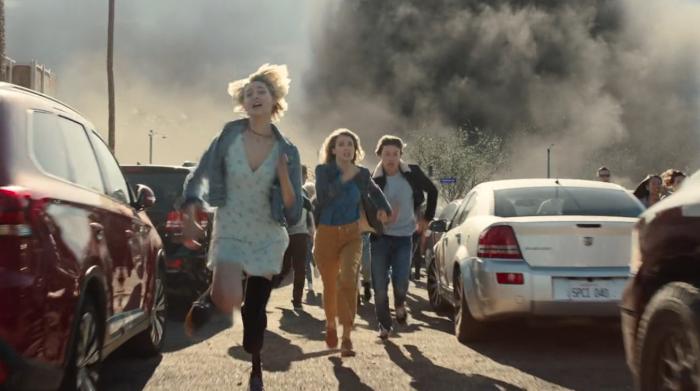 Time, that is, for Dustin to begin his journey into the sinkhole, as he begins his weekly updates on the goings on in Los Angeles (and also not Los Angeles) on the new NBC series La Brea.

I don’t know about you, but we are very excited to see how this goes for him.

Dustin tells us about the new AppleTV+ series The Problem With Jon Stewart, which ends up becoming another opportunity for Tori to lament the premature cancellation of Wyatt Cenac’s Problem Areas (which happens to be streaming on HBOMax for all of us to rewatch and realize that it remains sadly as relevant as when it aired).

Tori then explores the happenings over in Marvel world with last week’s What If? (remember, we’re back to recording on Mondays, so by the time this comes out the next episode will have released and you’ll be ahead of us, but you get it) and the implications it may have for the larger MCU!

After our journey into the sinkhole, we emerge to discuss the new South Korean Netflix hit Squid Game! NOTE: As always, there are spoilers in our discussions, but this one in particular has moderate spoilers all the way down to the end of the season, so if you hate even vague references to things that will end up happening, or just don’t want to be spoiled like I was, you may want to skip ahead! (The discussion runs from 46:14 to 1:06:20, and has chapter marks for those of you who are on your favorite podcast service.)

Finally, we end, of course, with our weekly Ted Lasso time, where I have returned to be the villain! Listen as Tori is forced to choose whether she agrees with Dustin’s optimism or my cynicism! Chaos!

Next week: if the fates align, perhaps another special guest???

Until then, thanks for listening, whether below or elsewhere or right here. We appreciate you!