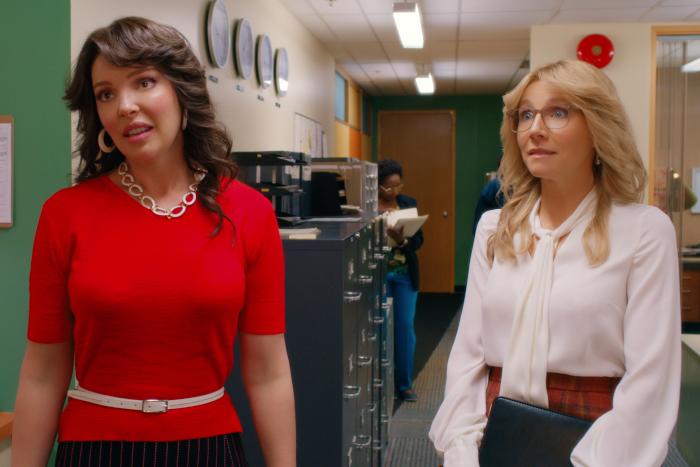 I read Kristin Hannah’s excellent bestselling historical fiction novel Four Winds last year, and yet it was only today — after watching the first season and a half of Netflix’s Firefly Lane — that I realized she is the same author responsible for this series’ source material. Either Kristin Hannah’s writing (and subject material) has gotten significantly better in the years since she published Firefly Lane, or the adaptation does the novel a disservice by transforming it into a sort of Lifetime series about sisterhood gently modified by the Netflix AI.

A quick glance at Hannah’s Goodreads page suggests that it’s neither: Maybe Hannah likes to write both lightweight romance novels and more substantive historical fiction. She gets no complaints from me. In fact, I didn’t hate the first season of Firefly Lane, which was both annoying and obnoxiously watchable. The season went down like a cheap Prosecco — a sort of lithe sisterhood fantasy about two women, played by Sarah Chalke and Katherine Heigl, who fall in and out of love with different men but always find their way back to each other. I watched the season over the course of two days.

Alas, whatever magic that first season had is gone in the second. It has vanished. It’s a chore to watch. I love watching television so much that I made it my job. I have a lot of patience for bad TV. But the second season of Firefly Lane is so bad — and so insipid, dull, and unwatchable — that I found myself dreading it, parceling out no more than an episode a day and begrudgingly, unwillingly watching it with a contorted face as though swallowing cough medicine.

All the life has left the characters. The first half of the season has a The Hangover II vibe — the second season recycles if not the plot then the same beats as the first season. Kate (Chalke), who met, fell in love with, married, and divorced Johnny (Ben Lawson) in the first season now has to fall in love with him all over again and remarry him before something more final than divorce gets in their way. Tully (Heigl), who worked her way up into a famous television journalist in the first season, is busted back down by a lawsuit and has to rebuild her career … on the Internet. In both seasons, there’s also a man in Tully’s life, but that man will never replace what she has with Kate, although both seasons end with Kate and Tully on the outs due to an event foreshadowed in flash-forwards.

Two years later, it’s no less ridiculous watching Heigl and Chalke play twenty-year-old versions of themselves in soft focus and bad ’90s outfits. The flashbacks to their teenage years, which are supposed to thematically tie into the present, feel even more pointless and detached. There’s also a potentially aborted storyline where Tully searches for her real father only to discover that he’s dead. However, her dead dad’s brother is an evil politician who has been mean to Tully all her career.

.
.
.
.
.
.
.
At the end of the season, Kate and Tully are estranged because Tully let Kate’s daughter Marah (Yael Yurman) go to a frat party while Kate was away, and when Marah called Tully to say that she’s been assaulted, a tipsy Tully jumped in her car to retrieve Marah and got into a car accident that left both Tully and Marah injured. Kate and Tully have a major falling out, but Kate finds that she has a hard time going through life without the support of her best friend, which comes to a head in the end when Kate is diagnosed with an aggressive form of breast cancer.

Will Kate die? Given the genre, tone of the series, and its almost pathological need to make its audience weep? Almost certainly. It should make for an insufferably sad final nine episodes. The quality of writing (and quite frankly, the acting in the second season) isn’t worth the misery the back half of the season will invariably put its audience through.