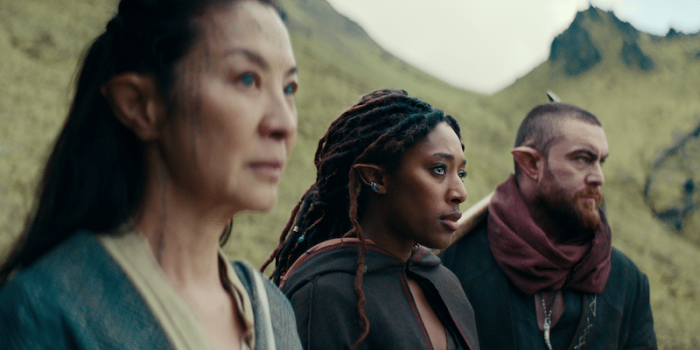 If you want a quickie review of Netflix’s four-part Witcher prequel, I’ll say this: At least it’s short. It’s even sort of entertaining if you turn your brain all the way off. A quirky band of seven outcasts takes up arms against an evil empire, and they do all right because recent Pajiba 10-winner Michelle Yeoh is with them and has a sword — like, it’s fine. The characters are interesting, the action is decent, and again — it’s short! The problems lie almost entirely in the ways it has forced its connective tissue to the main Witcherverse because they don’t make any sense. The creative decisions are kinda dumb. Wrong-headed, even. Bad.

Take, for example, the frame story for the series: A mysterious elf-mage, played by Minnie Driver (!?!), shows up and saves our favorite bard, Jaskier (Joey Batey), from the midst of a bloody battle, then whisks him off to a place outside of time and tells him a story. The story is that of the show — she narrates Blood Origin. She asks him to write it all down and then sing it to her people, to give them hope as they continue their struggle to survive in man’s world (a theme that’s been increasingly present in the main series of The Witcher). Great! Makes sense, bards sing songs to lift spirits! We love Jaskier, “Toss A Coin To Your Witcher” is still catchy AF! But what if I told you that the story he’s given — the story of Blood Origin — is… not hopeful at all? Sure, the scrappy band of misfits taking on the empire is mostly comprised of elves, but the empire they’re fighting is also comprised of elves! The empire took over the elven world by destroying its rival clans, then sought to expand its reach by meddling with magic that crossed the boundaries between worlds. This moment in history is literally the event that ruins the world of elves by introducing the worlds of monsters and men — the event known as the Conjunction of the Spheres — and though the rebels are able to topple the empire, they are not able to avert the disaster. It could be argued that their attempt to destroy the monolith that allowed mystical entry into the other realms is literally what brought those realms into conjunction. Blood Origin is a story about elven perseverance, yes, but it is also a story about elven greed and hubris.

So uh, sing a song about how elves are the authors of their own destruction I guess, Jaskier.

That’s one big structural choice that undermines the prequel — the frame that’s shoehorned on to give us a familiar face but ultimately promises a type of story it fails to deliver — but it isn’t the only one. Here’s the synopsis for Blood Origin that was attached to the first teaser trailer that Netflix released:

Set in an elven world 1200 years before the time of Geralt, Yennefer, and Ciri, The Witcher: Blood Origin will tell a tale lost to history: the creation of the first prototype Witcher, and the events that led to the pivotal Conjunction of the Spheres, when the worlds of monsters, men, and elves merged to become one.

Technically, Blood Origin does deliver on that promise. It’s not like we need to see this chapter of history to enjoy the main Witcher series but it sure is an enticing chapter to show! Two big events that are relevant even 1200 years later, revealed! Only, here again, the execution spoils the promise. The Conjunction of the Spheres happens at the very end of the fourth episode, so sure — we do see the events that lead up to it, and that’s literally all. We don’t get to see what happened afterward, save for a short scene of a boatload of humans washing up on a shore all confused. The implication, of course, is that the worlds of humans and monsters have collided with the world of elves and now they all have to share the same earth — and we all know that man becomes dominant, pushing the elves out. That’s the fallout that makes the Conjunction of the Spheres matter! If you’re gonna rewind the clock on the franchise and show events from 1200 years ago, why would you show all the stuff that happened just before the story finally gets good?

OK, so fine. Blood Origin is about the world of the elves before man arrived. That’s certainly a choice, but at least there’s some semi-valuable context to be gleaned. So how about that Witcher origin? That’s gotta be some good stuff, right? Makin’ mutants?

The first Witcher was originally just an elf warrior named Fjall (Laurence O’Fuarain). He, along with another elf warrior from an opposing clan named Éile (Sophia Brown), are the leaders of our little band of merry rebels. They set out to take down the empire to exact personal revenge and also save the common people who are starving because all the resources are going to this stupid interdimensional colonial push, but there’s one big problem: The empire has a big flying monster that zaps people into a fine red mist on its side. The empire’s head mage, Balor (the delightful Lenny Henry), has been erecting the monoliths — which were created by the dwarves, before the elves ran them out — and using them to cross into other dimensions. Balor is able to summon a monster to help them destroy the other clans by making a pact with… well, something in a desolate in-between realm (something that maybe is connected to the Deathless Mother?). So now this team of seven outnumbered plucky underdogs needs to not only topple an empire but also kill a giant flying monster.

Luckily, the team of rebels includes the mage who actually figured out how to use the monoliths for Balor, an elf named Syndril (Zach Wyatt), and his childhood friend, the mystical healer Zacaré (Lizzie Annis). When the team accidentally opens a doorway to the world of monsters and a smallish one follows them back home, they end up with a monster corpse… and a convenient monster heart. The two mages come up with a treatment that, like, blends the monster-heart energy into an elf, and may kill the person but also may give them the powers of a monster? It’s all very theoretical and shady, but hey — the team needs a monster on their side! So Fjall decides to undergo the treatment (because if he didn’t, Éile would have, and he literally just fell in love with her), and he turns into something that is closer to a were-beast than Geralt. When he’s angry he Hulks out and can’t control himself. And in the end, after he’s served his purpose and slain the flying thing, Éile has to kill him — though she’s pregnant with his child, which may be part-monster, so ta-da! The Witcher line is born!

Only… that’s not how Witchers happen. They aren’t born, they’re made, and the mutation process we’ve heard about in the series is a far cry away from mages synergizing people with monster-hearts. It’s like somebody stumbling on a mold that made them feel better one time a thousand years before Fleming sat down and discovered Penicillin. Sure, some elements look familiar: The black potion the mages fed Fjall to prepare him for the transformation isn’t all the different from the ones Geralt takes when he’s on the job. Parts of Fjall’s transformation are similar, from the golden eyes to the black veins, but the Witchers of the future don’t suddenly puff up into monsters themselves. Witchers gain the ability to be strong through their mutation, but the strength itself comes from years of extensive, grueling training. Technically you could call Fjall a “prototype” Witcher I suppose, but it’s clear that Witcher-wheel was almost wholly reinvented between this random elf and the mutations at Kaer Morhen. Perhaps it would be fairer to say that this is the origin of the concept of a Witcher — a being that is transformed solely to battle monsters.

If Blood Origin hadn’t made any promises at all, and had instead attempted to be a purely standalone offshoot of the Witcher franchise, it might have been successful. As it is, it’s easily either watched or skipped and won’t have any bearing on the next season of The Witcher, unless Jaskier suddenly starts singing songs about brave elves bravely not saving their world. In fact, the only detail that should have actually come into play in season three winds up being nothing more than a throwaway visual: An elven captain named Eredin (Jacob Collins-Levy) who got trapped in that desolate realm picks up a broken skull and slides it over his head like a helmet. Eredin is the name of the elf who becomes the King of The Wild Hunt, the skull-faced spectral riders who have targeted Ciri for her power in season two and are being set up as the next big foe.

Not that Blood Origin is telling the secret history of The Wild Hunt, mind you! That’d actually be relevant.


← What Are Your Pop Culture Resolutions for 2023? | 5 Shows After Dark: 'Will Trent' Premiere on ABC, 'Welcome to Chippendales' First Season Finale Hulu →