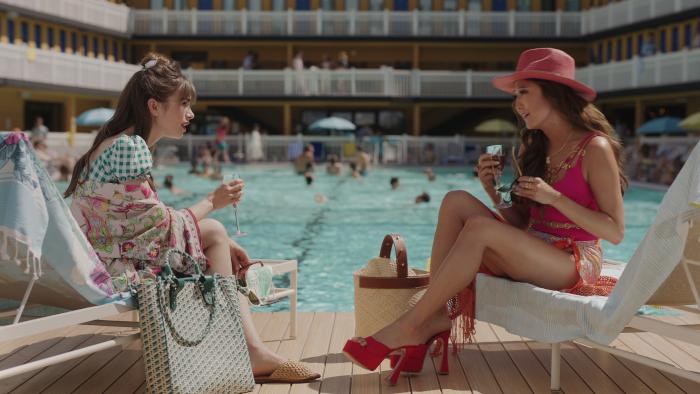 'Emily in Paris' Season 3: Emily For Once Is Not the Source of Drama, And That's the Problem

(AN INTERROGATION ROOM RESCUED FROM THE BACKLOT OF CBS STUDIOS. IT HAS EVERYTHING UP TO AND INCLUDING THE FULL-METAL TABLE AND TWO-WAY MIRROR, BUT IT DOESN’T HAVE A ROOF SO IT’S ACTUALLY VERY SUNNY INSIDE)

OK, you’ve made a big deal about how heroic you are for deigning to watch Emily in Paris (even though you’ve confessed to have a love-hate relationship with the show). You have now finished Season 3, is it any good?

No it isn’t. Is as straightforward as it gets. You can answer it in binary yes/no. You can answer in stars and fractions of stars. You can answer from one to ten. Or you can meander for 1,500 words and be a nightmare to your editors. But what you can’t do is try to answer this with another question. Simple as it gets: What’s your verdict, did you like it?

Well, it all depends on the prism you approach it.

For god’s sake man! You’re not a Tory in Question Time. Just give me a straight answer: Do I need to bother watching these 5 hours of TV or should I spend them on something else?


That’s what I was looking to start with! Emily in Paris is a fantasy, and just like anything written in the fantasy genre, it should be judged by what makes sense within the confines of the genre. Emily in Paris is a fantasy where a girl with the perfect job gets to move to one of the oldest and most diverse cities in the world, but only makes use of three or four districts. A fantasy in which the very first man you meet is your neighbor, a brilliant chef and a Paris 8 (and a 10 everywhere else), and both of you fall madly in love at first sight, even though he’s dating another French beauty who also becomes your best friend, and in which eventually you have another guy falling in love with you, a British banker who is a Paris 9 (and a London 12). It’s also a fantasy in which everyone in Paris is fascinated with this American girl because she is less sophisticated. In which a bunch of French youngsters hanging by a pool will immediately start vibing to a mid-song your best friend recorded, even though this is a country where people listen to Angéle, Clara Luciani, or Mylène Farmer. Where you succeed at almost everything you do because you are that charming and … so American. Also, your wardrobe is probably valued at the lower end of six figures, and even if Emily makes mid-six figures in her job, this series is a fantasy because she seems to be completely unaware of how much in taxes she’d have to pay in France. So no, you can’t judge this show as any other show.

That is… untrue in just about every way. Also, are we back to using 1-10 rankings for physical attractiveness? Didn’t we leave that shit in the 2000s?

Hey, I’m only using it for the guys. Not all double standards are made equal, you know?

SIGH. OK, let’s entertain for a second the notion that we need to judge Emily in Paris with a different set of standards. How does it measure up in that regard?


Well, for starters, Emily in Paris has become a go-to hatewatch, but this time … it’s just not messy enough. In fact, for once, Emily is not the main problem. I’m not saying she becomes likable, but she does become relatable. And that’s a problem because she is still a terrible person, but more in a lukewarm mess kind of way. Now, when it comes to everyone in her orbit … boy did they mess up their plots.

Oh yeah, that was a great premise for Emily to be a mess. But it blows up in her face in the first episode, and then it all gets swiftly resolved, no hard feelings, in the first four chapters. She’s back working with Sylvie and hogging the clients like Cristiano Ronaldo does with a ball.

And what about our queen Philippine? Does she get to thrive with her hot (and younger!) photographer boyfriend Erik (Søren Bregendal)?

Yeah, she ruins that relationship five episodes in, because she lets her not-ex husband back into her life, Erik has enough of that shit, and she runs back into the not-ex’s arms.

Wow, it’s like Darren Star cannot a woman over 45 find love with a younger man that adores her.

And what about the love quadrangle between Emily, Gabriel (Lucas Bravo), Camille (Camille Razat) and Alfie (Lucien Laviscount)? Does it get resolved?

In the worst way possible. See, the London 12 finally begins to open up (he’s been heartbroken before) and begins getting serious with Emily. Alfie is just perfect, a total mensch (despite being a banker) with Gabriel and Mindy (Ashley Park), but Gabriel is still hung up on Emily and confesses his feeling to her in a drunken stupor. Meanwhile, Camille starts having an affair with a Greek artist she represents, and they both spend several weeks in Greece with Gabriel none the wiser. Meanwhile, Emily catches Camille and her making out and keeps the secret even after Gabriel and Camille make up and get engaged.

Hold up, Camille’s lover is a woman? Oh no, is that incipient trope rearing its head again? Solving a love triangle with two equally good options by making one gay (or somewhere in the spectrum)?

Yep. But it gets worse, because [SPOILERS FROM HERE ONWARDS] Gabriel and Camille decide to have a spontaneous wedding, and just when they’re saying their vows …

No, this time Camille is the one to stop the wedding, accuses Gabriel of still being in love with Emily and snitches on the whole affair in front of everybody. Poor Alfie bye-Felicias Emily, because he’s still a Paris 9, and Gabriel was also his BFF (Best French Friend). There’s also a parallel plot about Gabriel wanting his restaurant to get a Michelin Star, having kids, and opening a restaurant in the countryside or something. Also, Camille is pregnant.

Whoa. I don’t have much hope they’ll solve those plotlines in a way that is dignified.

Yep, because Emily and Gabriel are endgame. Rom-com logic thinks people are like baby ducklings, where you imprint on the first person you meet. My money is on Camille losing the baby.

Damn. And what about Mindy?

Oh, her career starts taking off, then she reconnects with friend from her boarding school, who happens to be the handsome heir to this universe’s version of LVHM (and who Emily wants to nab as a client). Her musician boyfriend becomes intimidated and jealous, they break up and she starts dating the heir.

Yeah, but they reconnect again, because he sent the mid-song he wrote for her to Eurovision, and somehow qualified without going through any of the previous instances. It’s another love triangle.

Is there anything you liked?

The fashion is slightly less absurd this time. Emily actually wears this fab velvet pantsuit in one episode. Also, there’s a joke about the younger brother of the heir being into NFTs, made funnier because one of the younger Arnault siblings actually bought a bored ape.

Yeah, it’s like KFC, as long as it is once a year.


(THEY EXIT THE SALVAGED INTERROGATION ROOM AND GO TO THE MAKEUP ROOM TO PLAY CORPSES IN ONE OF THE FBI OR NCIS SERIES. ONE OF THEM IS ALBERTO COX WHO PROMISES YOU THAT POST AND MASTODON ARE ACTUALLY WORTH IT)


← 'I Wanna Dance With Somebody' Is a Celebration but Not a Success | Review: Ashes, Ashes, The Tower of 'Babylon' Falls Down →