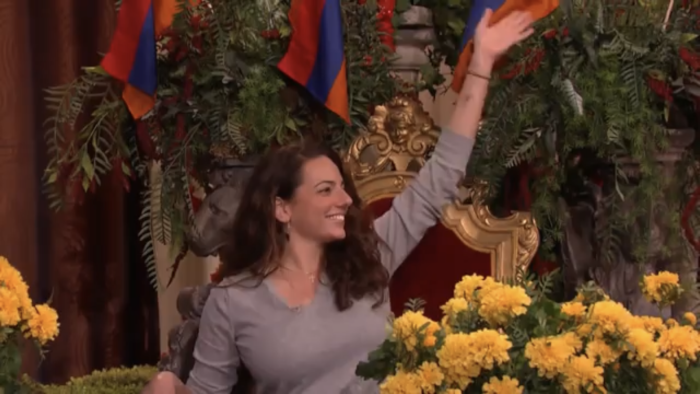 Sona Movsesian Is Having Twins!!

Not long ago, I asked our fearless leader, Dustin Rowles, if he found himself meeting more twins/people with twins when he and his wife were expecting theirs. You see, my wife is pregnant with twins and since we found out, suddenly everyone I meet has twins as well or is one themself. I thought it was a coincidence but Dustin told me the same happened to him. Now, that phenomenon just exploded on a grander scale!

Sona Movsesian, Conan O’Brien’s hilarious and charismatic assistant, announced this week that she is pregnant with twins! That in and of itself is great news. Sona is amazing and is, in my opinion, an integral part of Conan’s show and podcast. I’m absolutely thrilled for her and practically shrieked when she announced the news. Then it got even crazier!!

My wife and I are having twin boys, which is super exciting (until they get older and stronger and inevitably make fun of my glasses and taste in music). You see where I’m going with this?? Sona’s twins are boys as well!! I couldn’t believe it! I kid you not when I say I’ve met more people with twins in the last four months than in my whole life. While I haven’t met Sona, I cover Conan and the hip late-night scene for Pajiba, so I was gobsmacked to see/hear twins enter that part of my life too

So, congrats, Sona! And congrats to anyone else out there who has or is expecting twins! Mine are due soon, so I need at least a couple weeks free from hearing about them. I’ll just catch up on Wanda/Vision in the meantime. I haven’t watched it in a few weeks! I wonder what’s going on there!

← A Cat Thinks Long and Hard Before Hitting a Dog | Review: 'Nomadland' Paints an Epic Yet Intimate Portrait of American Life on the Fringes →