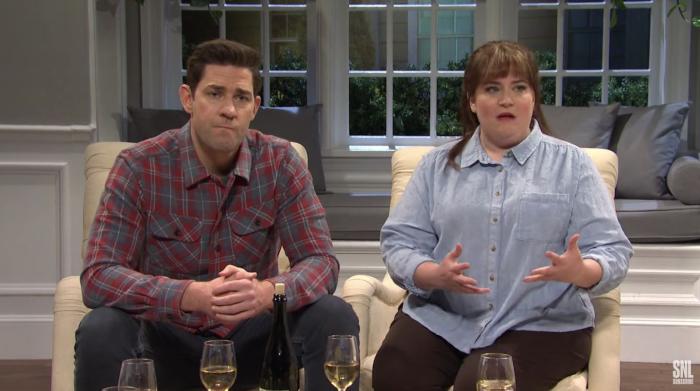 Cold Open — Kate McKinnon, as herself, plays the host of a show called What Still Works?, in which she wonders what still works now that we have a new President. Her first guest is Marjorie Taylor Greene, appropriately played by Cecily Strong. “Government doesn’t work,” the host concludes after 90 seconds with MTG. “The stock market doesn’t work, either,” she concludes after speaking with a GameStop guy. Likewise, “social media” (after speaking with Jack Dorsey and Mark Zuckerberg) and “the vaccine rollout” after speaking with OJ Simpson. The only thing that apparently still works? Tom fucking Brady (as played by John Krasinski). Great opener, although with Krasinki playing Brady, Roxana’s head must have exploded from hate. (Score: 8 out 10)

John Krasinki Monologue — A very-excited-to-host-the-show John Krasinski takes questions from the audience, and they all call him Jim, and they want him to “be Jim.” And they need someone to be Pam, and that someone is apparently Pete Davidson. There’s kissing involved. It is, alas, not a great monologue, although it’s less horrifying than the Wayne’s World ad for Uber Eats that follows the monologue. Ack! (Watch Here, but the GIF below is the punchline) (Score: 4 out of 10)

Blue Georgia — Pete Davidson plays a New Yorker who visits a Georgia diner full of stereotypical white Georgian hicks, who are now from a blue state, and therefore suddenly eat Avocado toast, elect Jews to the Senate, and embrace Black Lives Matter protestors. “I don’t know what they teach you there in Florida, but this here is Georgia. It’s Stacy Abrams’ country.” Fantastic. (Score: 8 out 10)

The Loser — John Krasinski plays an older brother in high school who defends his little brother who is being picked on by bullies, and it backfires for the little brother in ways that only a skit clearly written by Kyle Mooney can. Krasinki is good — the skit? Eh. (Score: 5.5 out 10)

The Dividend — Krasinski plays an economist calling into a stock market show, only to have his creepy f**king twins (Kate McKinnon and Mikey Day) interrupt the Zoom call, freaking out the hosts of the show. It’s very, very dumb — so stupid — and yet, God help me, I found myself laughing an embarrassing number of times. (Score: 6 out of 10)

Stars Sing The Theme Songs To Their Shows — Inspired by Nicole Kidman performing the theme for The Undoing, other stars of their own shows perform their theme songs. They all suck except Cousin Greg from Succession and Krasinki performing the theme song (with his own lyrics) to The Office, which more than salvages the skit. You’ve seen The Office, right, Mat? I’m sure your kids have, anyway. They’ll love this one. It’s dumb, but the good kind of dumb (except when Kyle Mooney shows up again as Baby Yoda). (Score: 6.5 out of 10)

Game Night — A quiet night game night in the suburbs is interrupted when the participants keep getting arrested by the FBI for being involved in the Capitol insurrection. It’s funny because the domestic terrorists are just like us! Ooof. (Watch Here) (Score: 4 out of 10)

I’m not going to post any clips of Machine Gun Kelly, but I will say this: Wow. He’s totally the guy that Ben Folds mockingly sings about in “Rockin’ the Suburbs.”

Weekend Update — “Update” was unusually long tonight, and while I was just starting to gain some appreciation for Che and Jost during the last year of the Trump Administration, Che delivers another goddamn transphobic joke to remind us of what we often dislike about him. So “edgy,’ Che. So edgy. Bowen Yang as Fran Lebowitz is pretty good, except that Kyle Mooney takes it too far when mocking Scorsese. Otherwise, “Update” is not only overly long but fairly unremarkable. The clips are below, although I won’t subject you Beck’s Mike Lindell segment. (Score: 4.5 out of 10)

Supermarket Sweep — I’ve never seen the show, but lesbian women posing as platonic “gal pals” must be a trend on it? This is a send-up of that, although not a very good one. (Watch Here) (Score: 3 out of 10)

Subway Pitch — During a marketing meeting with Subway, the old-timers want to bring back Jared, while a new guy from Chipotle wants to make a “protein bowl,” which is basically just a bowl of ham and salami. Nein. (Watch Here) (Score: 3 out of 10)

Ratatouille — This is as 10-to-1 as they come, as Kyle Mooney plays a rat who lives under a top hat on a character played by John Krasinski. The rat controls Krasinski while he’s having sex. The Ratatouille critic approves and wants his own sex rat. Super terrible skit, but I give it a bonus point for being so f**king weird. (Watch Here) (Score: 3 out of 10)

The best moment of the episode might have been here, where Machine Gun Kelly tries to pick up Pete Davidson and they fall off the stage.

← Is 'WandaVision' About an Avenger Breaking Bad? Maybe! | Review: 'A Glitch in the Matrix' Ponders The Really Real, Like Whoa →