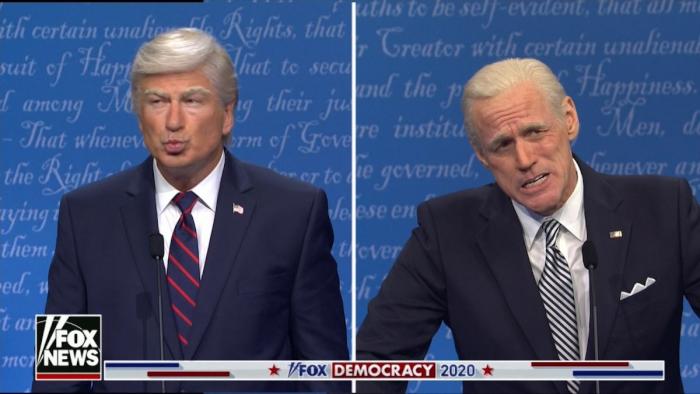 'SNL' Returns with Chris Rock, Jim Carrey as Biden, and a Fine Line on the Trump Jokes

Cold Open — Welcome to season 46! They open the show with the debate, which clearly had to be reworked after Trump’s diagnosis, and while the back-and-forth in the debate is parody-proof, Jim Carrey giving Joe Biden’s closing statement (after he muted the President) about the confluence of karma and science is great. So was Maya’s Kamala coming in to bring some discipline to the proceedings (my god, how I would have enjoyed a Kamala vs. Trump debate, but that is neither here nor there). I don’t think Carrey’s Biden is as funny as Woody Harrelson or, especially, Jason Sudeikis, but I didn’t hate it, either. He is better, even, than the other two at capturing the physical similarities and tics. Mostly, though, I’m just really ready to see Alec Baldwin’s Trump go away forever. (Score: 6.5 out of 10)

Chris Rock Monologue — Rock delivered a pretty good monologue, covering the pandemic, wishing good luck to the Coronavirus against Trump, really encouraging folks to vote so “that we can beat this thing,” and by that, he means Trump, and also — I’m sure to the delight of our dirtbag lefties (❤️) on the site — advocating for the end of our current form of government, where someone with no qualifications can be elected President and hold the office for four years, no matter what. Chris Rock’s still got it. I hope Fargo gets better. (Score: 7 out of 10)

Name Change Office — The local news had to cover an outbreak at a change-of-name office, where everyone has a terrible name. Basically, the entire skit is about juvenile, dirty-sounding names, like Edie Puthie and Mike Lit. In other words: It’s fantastic! (Memorize these names, Mat). (Score: 6.5 out of 10)

Hello — Chris Redd is back with another rap, accompanied here by Megan Thee Stallion, Ego Nwodim, and Chris Rock, and it’s about dating a woman wearing a mask whose face hasn’t been revealed yet. 5.5 for the lyrics; 8.5 for the music. (Score: 7 out of 10)

Future Ghost — A very Kyle Mooney sketch, where a loser teenager who plays video games in his parent’s basement is given a glimpse of his future by a ghost, and future Kyle is Beck still playing video games in his parent’s basement. He couldn’t be more excited. Eh. Kyle Mooney still sucks. See, there is some normality even in a pandemic! (This actually wasn’t that bad.) (Watch Here) (Score: 4.5 out of 10)

The Drew Berrymore Show — A great showcase for Chloe Fineman’s impressions here (she also does Reese Witherspoon and Nicole Kidman), and the skit itself is remarkably spot-on in capturing the naked, sweaty earnestness of Drew’s show, although it’s not terribly funny. (Watch Here) (Score: 5.5 out of 10)

Weekend Update — I thought that Jost and Che might dial it back on the Trump jokes out of concern that they might play badly if Trump drops dead later this week, but everything they are saying here is 100 percent accurate, especially the part about how we don’t want him to die. “We want him to have a nice lengthy recovery.” Yup. Meanwhile, Bowen Yang is absolutely fantastic as the Chinese Trade Minister talking about TikTok. (“If someone asked me to name an American company, and I said Walmart, then I’d be racist. What’s the matter? Was Cracker Barrell not available?”). Aidy Bryant as Carrie Krum on vacationing during the pandemic was OK. (Score: 7.5 out of 10)

Stunt Performers — It’s been a slow week for the stars of SNL: Kate, Cecily, and Aidy. I’m not mad, because Ego and Chloe are likely their successors. Here, Kate and Aidy play stunt performers for villains in children’s comedies. You know, the ones who fart when they get hit in the head. It’s not that great, but I have a feeling that Mat is gonna dig this one, anyway. (Watch here) (Score: 4 out of 10)

← Review: Amelia Moses' 'Bloodthirsty' Brings A Surprising And Twisted Tale Of Fame | All the 'Game of Thrones' Actors in HBO Max's 'The Murders at White House Farm' →