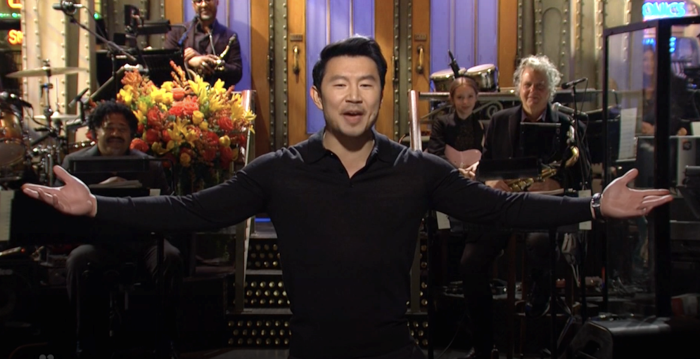 Cold Open — You can’t miss with Cecily Strong’s Jeanine Pirro, here to talk about the Kyle Rittenhouse trial. But bringing in James Austin Johnson with his Trump impression sours the whole thing. I think the fact that he’s so good at the impression makes it even worse, and this time he didn’t even talk about Toad! (Watch Here) (Score: 5 out of 10)

Simu Liu — It’s a short but sweet monologue, and Liu — who talks about a birthday party that motivated him — is charming and likable. Unfortunately, as was the case with Jonathan Majors, they sorely underutilized Simu Liu during the show. (Score: 7 out of 10)

Karaoke Recap — A dive bar recaps the best and worst in karaoke for a public access station. Damn near the entire cast gets a part. Simu Liu plays “finance bro trying to get laid,” and he can get it. (Score: 5.5 out of 10)

Target Thanksgiving — Target has special deals on products specific to the strange family members that attend your Thanksgiving dinner. Wine, in particular. (Score: 6 out of 10)

Project Domino — The military invented a new weapon for active combat: Dog Head Man. It’s a human with a dog head. The adorable dog is the real star here, hilariously uncooperative, and the cast can barely keep it together. It’s gold. Mat are you do dog person? Cause this is the Mat sketch of the night. (Score: 8.5 out of 10)

Republican or Not Game Show — The game is simple: Guess whether the subjects are Republican or not. It’s, uh, much harder than you might think. The final subject is … Liz Cheney, who is the “Rachel Dolezal of the Republican party.” (Score: 7 out of 10)

Walking in Staten — Well, I never got Pete Davidson, but seeing him sing “Walking to Staten” Marc Cohn-style is weirdly … compelling. Marc Cohn appears, too! And Method Man! Maybe the best skit of the year, so far. (Score: 9 out 10)

Weekend Update — I hate Kyle Mooney’s Baby Yoda. Hate. And he’s on for so long! (Watch Here) Che and Jost had plenty to work with this week (Rittenhouse, Gosar, Biden) and successfully make the easy layups. That Queen Elizabeth joke, though? Cringe face. Aidy Bryant Mother Nature is “hot and pissed” and here to talk about the environment. She’s not hopeful. (Watch Here) (Score: 4 out of 10 (mostly because of Baby Yoda))

Thanksgiving Baking Championship — The bakers have such vision! But no ability. One of the cakes barfs on a contestant, and Kyle Mooney’s cake looks like a dong. (Watch Here) (Score: 5.5 out of 10)

Bowen and Simu — Bowen and Simu keep getting awards for “First Asian to …” I was going to give this skit an 8, but my Podjiba co-host Dan Hamamura literally Slacked me to say that if I didn’t give it a 10, then I am a racist. (Score: 10 out of 10)


← 'The Wheel of Time' Series Premiere: Unexpected Turns in the Road | 5 Shows After Dark: 'Succession' on HBO, 'Call the Midwife: Special Delivery' on PBS →