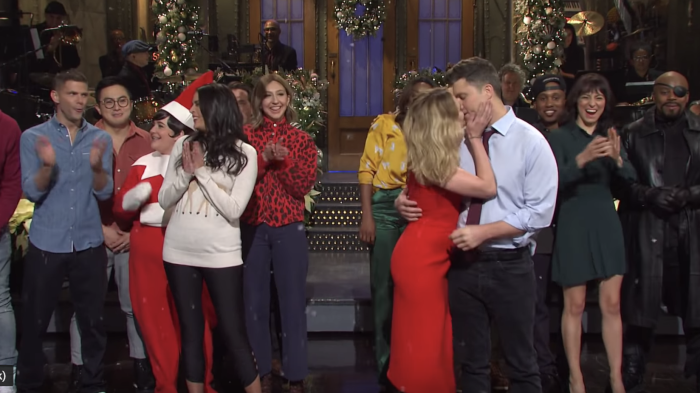 Cold Open — The Cold Open checks in with three families around the country over Christmas dinner. Two white families — a liberal and conservative one — are talking about Donald Trump’s impeachment. The Black Family doesn’t bother — he’ll be impeached, win, and get reelected, so what’s to talk about? — opting instead to give thanks to the three black QBs who beat Tom Brady this season (yes!). Except for Kate McKinnon’s kind of dumb, tacked-on Greta Thunberg impression at the end of the skit, it’s a great cold open thanks largely, as always, to Kenan Thompson. (Score: 7.5 out of 10)

Scarlett Johansson Mononlogue — I had completely forgotten Scarjo was hosting, and also, how is it possible this is her sixth time? In the monologue, Thanos/Pete Davidson shows up and dusts half the cast. It’s mostly lame except for all the jokes ScarJo makes at the expense of her fiance Colin Jost. “So what if it sucks? What are they gonna do, fire my boyfriend? Oh no, what will we do without his paycheck?” She also acknowledges at the end of the skit that she met “the love of her life” on SNL and pointed in the direction of Jost, so I guess it’s actually real. Like, really real. Huh. (Score: 6 out of 10)

Elfs Singing — ScarJo and Kenan play hairdressers turned hip-hop singing elves who sing about, among other things, “Mrs. Claus needing to get railed by elves.” The songs are not great, but Heidi and Beck’s reactions in the peanut gallery are OK. (Watch Here) (Score: 4 out of 10)

Macy’s Ad — An ad Macy’s about the winter clothes that kids hate. I don’t know who wrote this ad, but he or she definitely has kids. It is the most on-point skit of the year. It is perfect. (Score: 9 out of 10)

Office Apology — After being fired, ScarJo and Kenan show up the next day to apologize to their co-workers after drinking too much and saying a lot of inappropriate things during a work party. The joke is that everyone loves it when Charlie says inappropriate things to them but they all think Linda is absolutely terrible. Eh. You’ll appreciate this one, Mat. I won’t say why. (Watch Here) (Score: 5 out of 10)

The George and Kellyanne Love Story — It’s a trailer for a Netflix movie about Kellyanne and George Conway’s marriage. There is a ton of potential here, but it’s just a lot of low-hanging fruit. Shame. It’s definitely worth watching, but don’t get your hopes up. (Score: 5 out of 10)

Weekend Update —The political jokes this week aren’t bad, but they’re super depressing. It’s not even 2020 yet, and we’re already making jokes about how badly the Dems are gonna lose next year? God. Bowen Yang talks trade war with China (watch here) and Kyle Mooney plays Baby Yoda, so Baby Yoda is over now (watch here). It’s a mostly decent “Update,” except for that terrible Weinstein joke, Che. (Score: 7 out of 10)

Hot Tub — ScarJo and Cecily Strong play the ghosts of two dead strippers who haunt a hot tub every Christmas. They sing a very nice song about how they died in the hot tub while on quaaludes after they drank too much tub water while having a staring contest. (Score: 5 out of 10)

Hallmark Matchmaking Show — It’s dating show, and all the contestants are Hallmark movie caricatures — a hot Ghost, a prince, and a guy who is secretly Santa. It’s not that it’s a bad skit, it’s just that it’s not a very good one. (Watch Here) (Score: 4.5 out of 10)

Choking Models — Johansson and Bowen play the models from the Choking Posters seen in workplaces, and when they go out for dinner, they have to deal with their obsessed fans. There have been a lot of mediocre skits tonight. This one is a real stinker. (Watch Here) (Score: 2 out of 10)

Fox News Dog — A device that transmits a dog’s thoughts out loud allows a scientist to have a conversation with a dog who is left home to watch Fox News all day. He’s a Trumper, so you can guess where this is going. Also, by my count, this is the third skit tonight in which they make the joke, “Trump is going to be impeached and win reelection.” Guh. (Watch Here) (Score: 3.5 out of 10)

← A Loving (and Reluctant) Farewell to TK On His Last Week at Pajiba | How to Cope When Taylor Swift Doesn't Invite You to Her 30th Birthday Party (But Ryan Reynolds Goes?!) →