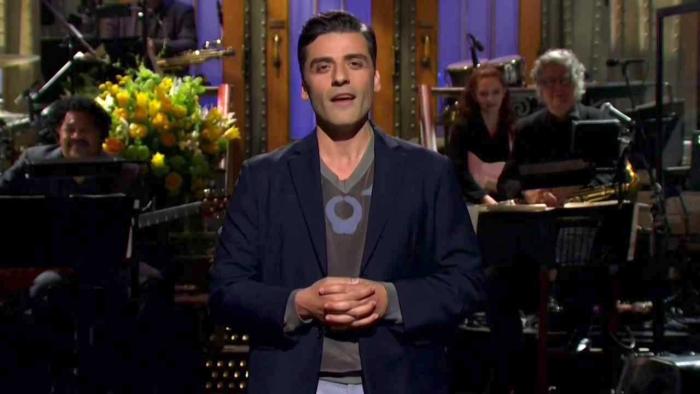 The Cold Open — The show kicks off with “Live from Mar a Lago: The Fox News Ukrainian Invasion Celebration Spectacular” with host Tucker Carlson and Laura Ingraham. McKinnon can do a solid Ingraham, but poor Alex Moffat: No matter how well he gets the expressions down, he could never channel the pure malevolent evil of Tucker. They’re raising money for Russian oligarchs (Trump is on the phones), and Bowen Yang is … Putin’s buddy, Steven Seagal … ? And Don Jr. and Kimberly Guilfoyle sing a horrendous version of “Shallow.” It’s a suitably vicious and effective sketch, but man: It is hard to see all those people in an 8-minute chunk. (Score: 6.5 out of 10)

Oscar Isaac Monologue — Isaac is a delight. He uses the monologue to show a home movie he made when he was 10 called The Avenger. It’s adorable. (Score: 6 out of 10)

Paw Patrol — A mayoral candidate and “concerned citizens” of Adventure Bay take issue with the fact that their town is run by Paw Patrol dogs. “Six dogs cannot protect a city roughly the size of San Diego!” It’s funnier in theory than in execution, which is a running theme of tonight’s show. (Watch Here) (Score: 5 out of 10)

Inventing Chloe — In a pretaped segment, Chloe Fineman discovers that she can get anything she wants by portraying Anna Delvey (and she nails the bad accent). (Score: 6.5 out of 10)

Sexual Harassment Training — Oscar Isaac and Cecily Strong play the worst HR professionals ever, which hits upon another theme of tonight’s show: Sexualizing Oscar Isaac (not a complaint). (Score: 6 out of 10)

Meatball Guy — A woman on a date wears a green ribbon around her neck. When she takes it off, there’s a meatball-looking Oscar Isaac singing his little song. In fact, she has meatball-looking little people all over her body, and they harmonize. Oof. (Watch Here) (Score: 3.5 out of 10)

Weekend Update — Che and Jost take on the Ukranian invasion, Putin, and a joke about Kamala that stings. Kate McKinnon appears as herself to celebrate Florida’s “Don’t Say Gay” bill until she realizes it is not an anti-bullying law — it’s the one “great” segments of the night. Ego Nwodim is Pauline, a “pregnant weary mother at her darkest hour” complaining that she doesn’t look as good pregnant as Rihanna. It’s one of those nights where “Update” is the best part of the show by default. (Score: 7 out of 10)

The Sexual Woman — Aidy Bryant writes herself a sketch that allows her to be objectified by Oscar Isaac, which is a very funny idea (the actual skit? Meh.) (Watch Here) (Score: 5 out of 10)

In Over Your Head — Kenan plays a character who hosts a show about people who take on home improvement projects that they have no business taking on. Oscar Isaac’s character is outstanding, but the rest of the skit is … OK. Nevertheless, for Isaac’s part, it’s the Mat skit of the night! (Score: 5.5 out of 10)

Fiction Workshop — Oscar Isaac plays a janitor who crashes a writing workshop to deliver his creepy fan-fiction with Dua Lipa. (Watch Here) (Score: 3.5 out of 10)


← 'The Batman' Is a Hellish Fusion of Genres and Ideas, and It's Absolutely Fantastic | Are Chris Evans & Ana de Armas Dating? →