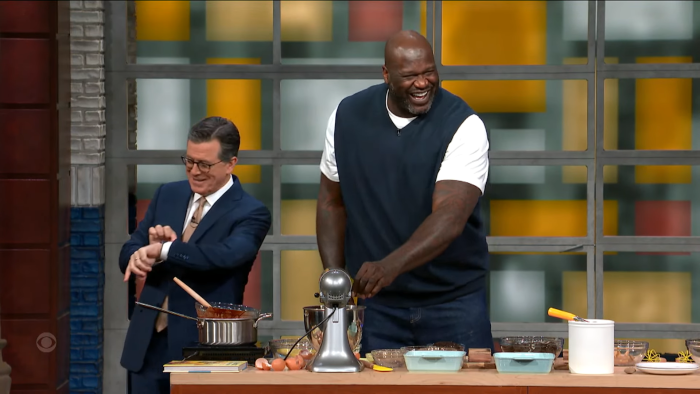 It’s not easy to go from professional sports to broadcasting. There are plenty who do it, but more who don’t. It takes a certain kind of quality that not every athlete possesses. It’s not just about analytics or play-by-play. It takes charm, and as a great man once said:

Shaquille O’Neal is charm type. He always has been. Even when he was on the court making move, he was off the court making movies! The quality of those movies is irrelevant. What matters is, Shaq is an undeniable star. It only makes sense that he would find a career in broadcasting after basketball. Now he’s moving on to cooking!

Shaq stopped by The Late Show with Stephen Colbert to talk about his new cookbook and show Stephen how to bake some brownies! Colbert is charm type as well, don’t get me wrong. He hardly needs help charming an audience. There’s just a way that Shaq commands a room that even someone like Colbert may never duplicate. Granted, part of that is because Shaq towers over most humans at over seven feet tall. He eclipses Colbert!

The chemistry on display between these two is something. They’re both quick, smart, funny humans and unsurprisingly go great together. They even manage to work in a joke about Charles Barkley that almost shuts the segment down. If this doesn’t get Shaq his own cooking show, I don’t know what will.

Maybe The General can be his cohost? I’d watch the hell outta that.

← The Political Hellscape Is Just a Little More Hellish Today | Where Are the Dragons in 'House of the Dragon'? →