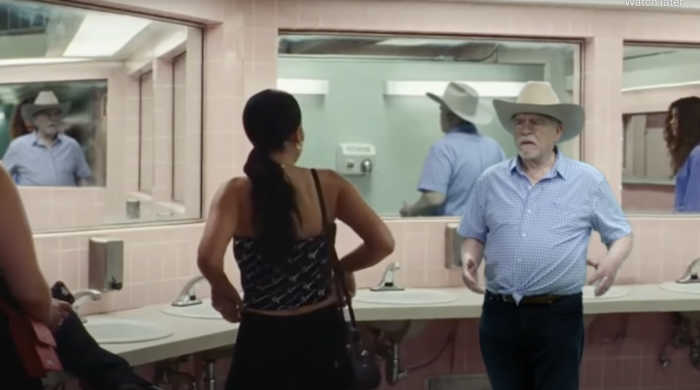 The two biggest shows on HBO are Euphoria and Succession. Euphoria has more viewers, and a lot more sex, but Succession has all the awards. But what if Euphoria could borrow some of that gravitas from Succession by inserting Emmy-winner Brian Cox, and what if Brian Cox were to recreate Sydney Sweeney’s meltdown sequence from the season finale?
It would look a lot like this:

“I’m in love with Nate Jacobson, and he’s in love with me!” Cox clearly demonstrated a sense of humor and a give no-f*cks attitude while out promoting his memoir, but I’m still a little surprised he agreed to a bit where he wears that shirt and a cowboy hat.

On that same show, by the way, Brian Cox says he regrets what he said about Johnny Depp in his memoir, but only because Cox has learned what anyone else who works online already knows: Depp stans are like “some CIA agency or something that works on his behalf.” Yeah, no sh*t. No one is more rabid than Depp fans, except for that one lady who is single-handedly trying to destroy the reputation of Keanu Reeves’ girlfriend, Alexandra Grant.