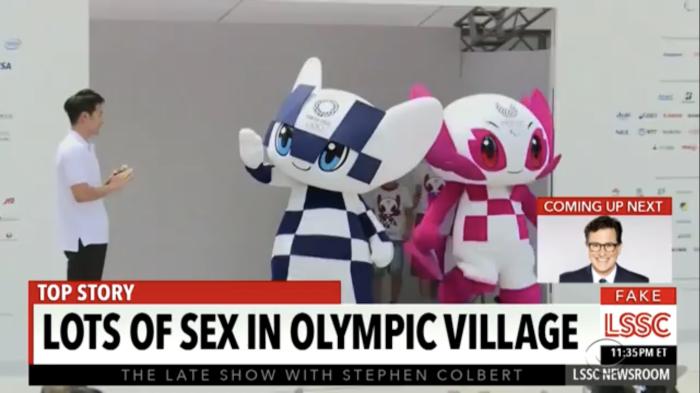 Olympic mascots need love too, y’all. Like any normal human being encased in several pounds of foam rubber, they seek that love from other … like-minded individuals. I’m not here to shame furries. Not by any means. In fact, after reading a very recently written Web MD article about furries, I’m not even sure the mascots for the Tokyo Olympics qualify as such. What I do know is, according to The Late Show with Stephen Colbert, they are definitely knocking their foam feet that they use as boots.

With COVID still … very much a thing, the Tokyo Olympics are happening anyway and officials are taking steps to ensure that athletes do not “co-mingle.” Because if there’s one thing the Olympics do better than bankrupting whatever city hosts the Olympics, it taking the fun out of recreational activities. They won’t stop the mascots, though! Not when they’ve got such an excellent song to bump softies to!

It is not the first, third, or even fifth time that the Colbert Crew has delivered a hilarious song to start their show. It likely won’t be the last either. I do not exaggerate when I say that this sketch made me laugh harder than I have in days. It’s so silly, so joyful, and even features a cameo from a very well known mascot. Also, the song slaps (I’m hip).

Watch this video and try not to picture these two strong, healthy, attractive mascots just going to town on each other. You can’t do it! It’s going to be in your head for the rest of the day! It’s certainly still in mine… Wait, am I a furry now? Maybe just a little fur-curious?

I’ve got some googling to do.

Then some internet searching.