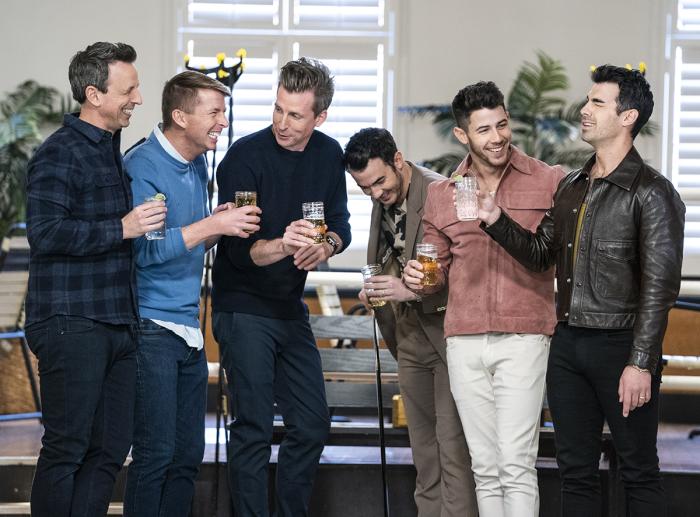 Seth Meyers Goes Day Drinking with the Jonas Brothers (And His Brother, and Jack McBrayer)

Last night, Seth Meyers had another edition of Day Drinking, in which he spent the day ingesting mostly disgusting concoctions (and Coors Light) along with the Jonas Brothers. So that he wasn’t outnumbered, he also brought along his own brother, Josh, as well as Jack McBrayer. It’s a good thing, too, because as it turns out, the Jonas Brothers are not particularly exciting drinking companions. But you know who is? Jack McBrayer. He’s a delightful drunk.

To their credit, the Jonas Brothers did turn things around in the end when the two groups played a game called “Five Minute Pop Song,” in which they drunkenly composed and then performed a pop song. Josh Meyers excellently rhymed “zenith” with “penith,” but the Jonas Brothers won the game by writing a song about 69 called “Home by 9.” Sample lyric: “Let me lick your toes, I want to blow your nose.”

There’s a reason why they’re professional musicians, although to be honest, I feel like they had that lyric in the chamber. You just don’t come up with genius like that on the spot when you’re 20 drinks in.

Emily would like me to note here that, now that the Jonas Brothers are doing this, the bit has reached its natural conclusion.