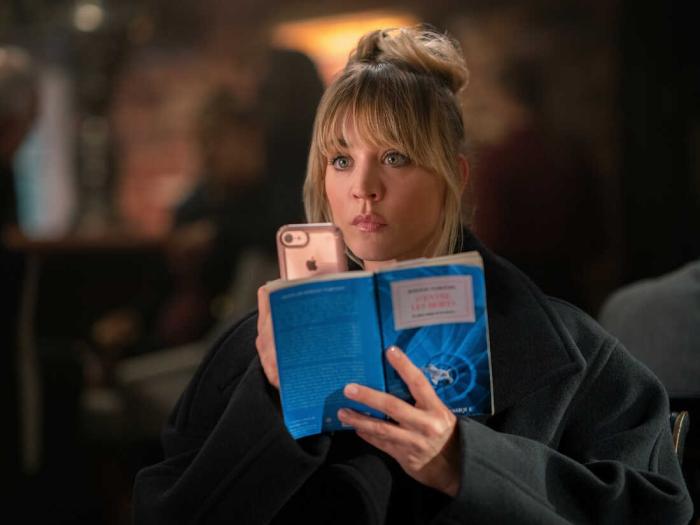 With few exceptions — the second and third seasons of Damon Lindelof’s The Leftovers immediately springs to mind — television doesn’t have a particularly good track record of extending a series beyond the novelized source material. Game of Thrones fell apart without the final two books in George R.R. Martin’s A Song of Ice and Fire to underpin it; the second season of HBO’s Big Little Lies was a shell of its former self; and Hulu’s The Handmaid’s Tale seems to wane creatively the more it drifts from the original source material.

It is nevertheless tempting to continue successful television adaptations beyond the source material, particularly when those shows involve enthusiastic fanbases and strong, well-developed characters. The problem with the second season of The Flight Attendant, however, is not in the characters; it’s in the plotting. Without the framework of the novel to guide the story, a heavier burden falls on the actors. However, the talents of Kaley Cuoco, Zosia Mamet, Rosie Perez, and the rest of the outstanding supporting cast in Flight Attendant cannot paper over the flimsy, slapdash nature of the storytelling.

A good mystery novel — like Christopher A. Bohjalian source material — is meticulously outlined and diagrammed before the author begins to fill it in. The second season of Flight Attendant feels more like the story was developed on an episode-by-episode basis, as though the writers had only an ending in mind and merely steered the boat into that direction. Cuoco, who also produced the series, even seems to admit as much in the behind-the-scenes featurette after the final episode when she says that she told the creator that, after the main storyline had wrapped, the season needed another twist ending. The last half hour of the season feels like exactly that: A subplot that calls back to the main villain in the first season but otherwise feels tacked on, like a C-plot specifically woven into the story to provide more punch without any depth.

The A-story doesn’t fare much better. Spoilers here, but the main villain in the second season ends up being Dot Karlson (Cheryl Hines), a CIA agent overseeing Cuoco’s Cassie Bowden. How the season arrives at that doesn’t feel like the product of a structured plot. Rather, it feels as though the writers started with a main villain and then provided a totem (in this case, a Viewfinder with pictures of a number of destinations) that would move Cassie around on the chessboard a few times until the season ran out of episodes. Dot’s conspirator, Grace St. James (Mae Martin), meanwhile, is plugged into a few scenes and then conveniently dispatched when she shoots herself in front of Cassie on a roller coaster. Mamet’s Annie and her boyfriend, Max (Deniz Akdeniz) — easily the best characters this season — mostly exist to help Cassie decipher the destinations pictured in the Viewfinder. The plot doesn’t come full circle so much as it is a straight line that branches off into a few dead ends. A motive isn’t even ascribed to Dot’s actions until after she is apprehended.

Without the presence of the ghost of Michiel Huisman’s character, the second season spends an inordinate amount of time in a fantasy world where various versions of Cassie — young Cassie, drunk Cassie, sober Cassie — argue with themselves over what to do next or whether to have a drink. Too much of the season is about Cassie’s interior battle, and Sharon Stone is brought in for what feels like a late addition in a couple of scenes separate from the main storyline to give Cassie’s internal battle some emotional resonance, as well as a jolt of star power. The tear that Cassie sheds in the phone call with her mother in the final scene of the season, however, feels wholly unearned.

In the end, it doesn’t add up to much — especially the tacked-on stalker plot with Jessie Ennis (who is everywhere these days) — and the whole season ends in a curiously unsatisfying manner.

And yet, though the season isn’t as zippy and satisfying as the first, it doesn’t feel like a waste of time, either. That’s because these characters — and the actors portraying them — are tremendously good. Every time Cassie has an extended argument with herself in her fantasy land, the story stalls out, but these little side rooms in Cassie’s head aren’t a bad place to be. Cuoco is good, and the diversions are often fun to watch. Likewise, Annie and Max have their own little rom-com sitcom storyline on the side, and there’s an incredible amount of chemistry between the two that makes it fun to watch. Cassie’s love life, on the other hand, is less engaging — there’s a serious relationship that sputters out and a hook-up session with her handler, but neither of those relationships goes anywhere beyond a lame high-five. Rosie Perez’s Megan — so good in the first season — is mostly siloed, kept away from the main action in what is largely a nonsensical D-plot. Likewise, Cassie’s brother, played by T.R. Knight, is jammed into the stalker storyline with spit and duct tape, but it is nice to see him.

Ultimately, it makes for a much less successful second season, but the first season of Flight Attendant was so good that there was plenty of room to fall. While the characters are as good as ever, the clumsy plotting, unfortunately, robbed the second season of that addictive, binge-watching quality that made the first one so great.


← Review: In 'Conversations with Friends,' the Most Important Things Are Left Unsaid | 'Plan and Execution': Let's Talk About That Midseason 'Better Call Saul' Finale →