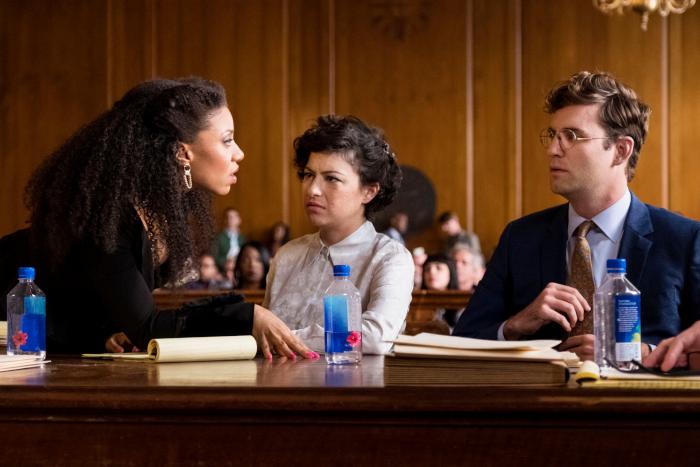 Search Party season 3 is something akin to White Woman’s Tears: The Dory Sief Story. The season has been sitting on the shelf for nearly three years, resurrected in 2020 and moved from TBS to the HBO Max streaming platform. In some ways, it feels like a series that was filmed three years ago; in some other ways, it feels uncomfortably relevant, as it moves from a critique of privileged millennials to a more specific critique of white victimhood.

The third season picks up immediately after the events of season 2, wherein Dory (Alia Shawkat) and Drew (John Reynolds) are being charged in the murder of Keith, a private investigator played by Ron Livingston. The deal, however, is this: Despite mountains of evidence against them, and despite the fact that Dory could easily make the case that the killing was in self defense (because it was), Dory decides to plead not guilty, as in: She didn’t do it. She didn’t kill him, in self defense or otherwise. She claims she had nothing to do with Keith’s death. This is obviously upsetting for Drew, who is being tried alongside her (with Louie Anderson playing his phoning-it-in lawyer), and who does not have the benefit of being pretty and capable of crying on command, which Dory employs to tremendous effect in both interviews with the press and on trial. She weaponizes her own victimhood in a court of law so effectively that she is able to remove herself entirely from the reality of the situation. “I forgive [Keith’s family] for placing the blame on me,” she tells a reporter, a single tear rolling down her face. “It makes sense. If everyone else is blaming me, why wouldn’t they?” Dory says, pitifully. 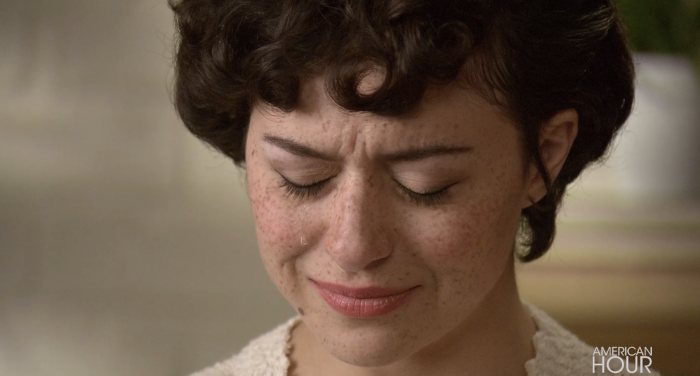 In fact, there’s a masterfully comic (and satirically cutting) scene near the end of the season, where Drew pulls out the murder weapon (a small statue he used to kill Keith, who was trying to choke Dory to death at the time) and tries to remind Dory that they actually did kill Keith. “Admit it,” Drew yells. “You are not a victim, Dory! Admit it. Admit it to me, that we killed Keith!” Even confronted by her conspirator in front of friends to whom she confessed, and with the murder weapon being waved in front of her, Dory still somehow manages to make herself the victim. “Stop yelling,” she yells back at Drew. “I feel like you’re going to hit me,” she flinches, before insinuating to Drew that if he doesn’t back off, she’s going to pin the entire murder on him. The scene solidifies Dory as a sociopath.

Season three of Sarah-Violet Bliss, Charles Rogers and Michael Showalter’s series is not quite as funny as earlier seasons — humor ages as quickly as the news cycle during the Trump era — but its satire is more toothy and malicious. I think it even may have been a little ahead of time had it been released two years ago before the rise of the Karen; its release ironically seems to have arrived at just the right time.

The always terrific Michaela Watkins recurs this season, as well, as the exasperated prosecutor who has every ounce of evidence necessary to convict Dory and Drew, and yet still can’t seem to pierce through their privilege, which seems to trump the truth. The season also critiques the tabloid media — and our obsession with castigating millennials — but that storyline feels dated, as does the $1.2 million wedding that Elliot (John Early) throws, which he is only able to afford thanks to sponsorships. Likewise, Portia (Meredith Hagner) — who testifies against Dory — decides to join a church, not out of religious conviction, but because she’s trying to find new friends (that storyline feels very Showalter).

It’s a quick, cutting, and mostly entertaining season that goes down quick, even if it’s not as funny, largely owed to the sidelining of Meredith Hagner and John Early. Meanwhile, season one stand-out Brandon Michael Hall is given only a tiny subplot separated from everyone else (he was likely busy with other projects during the filming of season three). Season 4, which was filmed early this year and also already in the can, and will hopefully arrive on HBO Max within the next three years. Given how quickly how our collective attention shifts to new cultural punching bags, it’s anybody’s guess as to how relevant it will be remain once it finally comes out.

← Review: Haunting Horror 'Relic' Will Make You Want to Call Your Mother | Review: 'Warrior Nun' Commits the Cardinal Sin of Being F**king Boring →