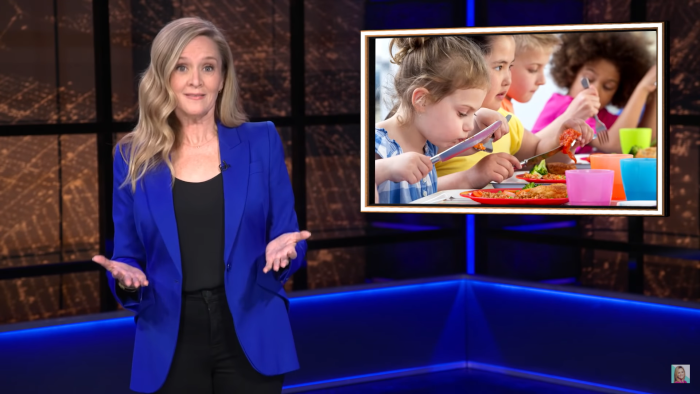 As a child, I was surprised that my parents had to pay for my school lunch. It never made sense to me. The school was providing everything else. Why not food? Was it more important that I have scented markers? This confusion is something that young me and Samantha Bee have in common. In a recent episode of Full Frontal, she dove deep into why children deserve free lunch at school.

Public schools force parents to pay for their kids’ lunches. That in and of itself is pretty insane. Luckily, there has been a recent program in place for universal free lunch. However, the program is set to expire in just a few months. Then, schools have to return to old practices. Those practices include harassing and shaming kids whose parents can’t afford to pay for their lunch. Public school kids are one missed payment away from being treated like Sandler in Uncut Gems.

The thing is, most prospective voters are in favor of free school lunches. That is because most human beings aren’t inhumane monsters. Those would be Republican Senators (nailed it). All but two GOP Senators are opposed to continuing universal free lunch. Mitch McConnell is even (allegedly) going out of his way to try and block it. The “pro-life” party doing what they do best, which is trying to strip all the “pros” from life.

Children should be fed at public schools. That should be a non-partisan issue. Unless what? Republicans just want to get rid of public schools all toge— Ahhhhhhh. Now I see what they’re doing.


← Elon Musk Has Some Ideas | No Wonder Netflix Is Broke: Trailer for Mike Myers' 'The Pentaverate' →